HOW TO SPEAK UP WHEN YOUR MOUTH IS SHUT: STORIES OF HUMAN RIGHTS DEFENDERS IN AZERBAIJAN 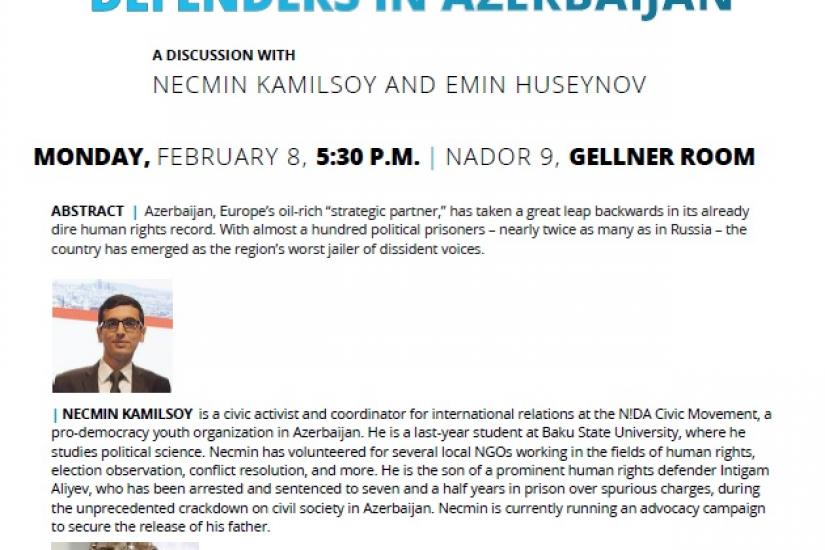 Human RightS Initiative cordially invites you to participate at the panel discussion HOW TO SPEAK UP WHEN YOUR MOUTH IS SHUT: STORIES OF HUMAN RIGHTS DEFENDERS IN AZERBAIJAN with Necmin Kamilsoy and Emin Huseynov

Abstract | Azerbaijan, Europe’s oil-rich “strategic partner,” has taken a great leap backwards in its already dire human rights record. With almost a hundred political prisoners – nearly twice as many as in Russia – the country has emerged as the region’s worst jailer of dissident voices. Azerbaijan human rights situation has become one of the key topics in the policy dialog with the EU and US. The progress and policy instruments are limited however. The speakers will share their perspective on the possible ways of democracy and human rights development in Azerbaijan including the effort of local civil society and international community.

| Necmin Kamilsoy is a civic activist and coordinator for international relations at the N!DA Civic Movement, a pro-democracy youth organization in Azerbaijan. He is a last-year student at Baku State University, where he studies political science. Necmin has volunteered for several local NGOs working in the fields of human rights, election observation, conflict resolution, and more. He is the son of a prominent human rights defender Intigam Aliyev, who has been arrested and sentenced to seven and a half years in prison over spurious charges, during the unprecedented crackdown on civil society in Azerbaijan. Necmin is currently running an advocacy campaign to secure the release of his father.

| Emin Huseynov is a prominent and internationally recognised human rights defender and former chairman of the Institute for Reporters’ Freedom and Safety (IRFS), one of Azerbaijan’s leading media organizations. Huseynov was forced into hiding in August 2014, amidst widespread repression of journalists and human rights activists, and was sheltered in the Swiss embassy in Baku until Friday 12 June, 2015 when he travelled to Switzerland on a humanitarian visa. His application for asylum was approved four months later. He currently resides in Bern, Switzerland.

The panel is going to be moderated by Nataliya Novakova, MPA student at CEU School of Public Policy. Nataliya also works with International Partnership for Human Rights (Brussels based NGO) coordinating the projects of support for families of Azerbaijani political prisoners and support of Azerbaijani human rights lawyers. Before that, she worked as junior fellow at European Stability Initiative doing research on the persecution of civil society activists in Azerbaijan. Nataliya worked on the submission to the UN Committee against Torture in relation to its examination of the fourth periodic Report of Azerbaijan (2015).