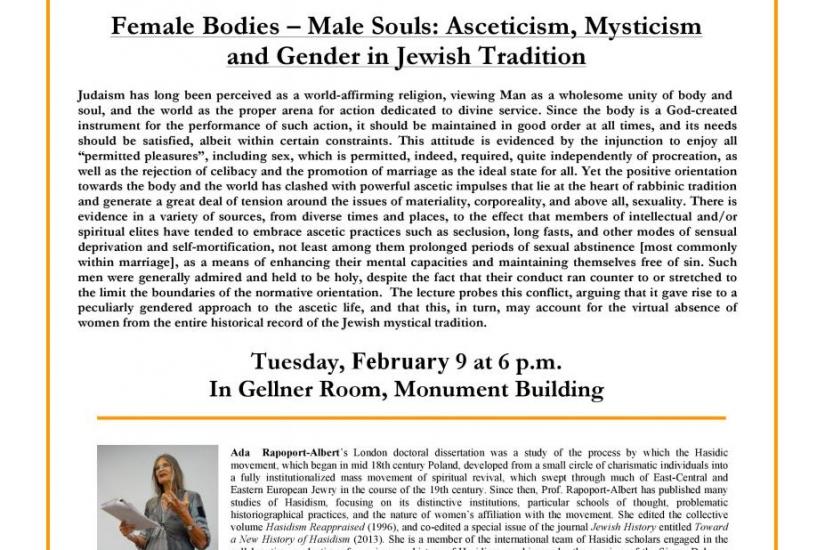 Judaism has long been perceived as a world-affirming religion, viewing Man as a wholesome unity of body and soul, and the world as the proper arena for action dedicated to divine service. Since the body is a God-created instrument for the performance of such action, it should be maintained in good order at all times, and its needs should be satisfied, albeit within certain constraints. This attitude is evidenced by the injunction to enjoy all “permitted pleasures”, including sex, which is permitted, indeed, required, quite independently of procreation, as well as the rejection of celibacy and the promotion of marriage as the ideal state for all. Yet the positive orientation towards the body and the world has clashed with powerful ascetic impulses that lie at the heart of rabbinic tradition and generate a great deal of tension around the issues of materiality, corporeality, and above all, sexuality. There is evidence in a variety of sources, from diverse times and places, to the effect that members of intellectual and/or spiritual elites have tended to embrace ascetic practices such as seclusion, long fasts, and other modes of sensual deprivation and self-mortification, not least among them prolonged periods of sexual abstinence [most commonly within marriage], as a means of enhancing their mental capacities and maintaining themselves free of sin. Such men were generally admired and held to be holy, despite the fact that their conduct ran counter to or stretched to the limit the boundaries of the normative orientation.  The lecture probes this conflict, arguing that it gave rise to a peculiarly gendered approach to the ascetic life, and that this, in turn, may account for the virtual absence of women from the entire historical record of the Jewish mystical tradition.

Ada  Rapoport-Albert’s London doctoral dissertation was a study of the process by which the Hasidic movement, which began in mid 18th century Poland, developed from a small circle of charismatic individuals into a fully institutionalized mass movement of spiritual revival, which swept through much of East-Central and Eastern European Jewry in the course of the 19th century. Since then, Prof. Rapoport-Albert has published many studies of Hasidism, focusing on its distinctive institutions, particular schools of thought, problematic historiographical practices, and the nature of women’s affiliation with the movement. She edited the collective volume Hasidism Reappraised (1996), and co-edited a special issue of the journal Jewish History entitled Toward a New History of Hasidism (2013). She is a member of the international team of Hasidic scholars engaged in the collaborative production of a major new history of Hasidism, working under the auspices of the Simon Dubnow Institute in Leipzig. In addition to her work on Hasidism, Prof. Rapoport-Albert's interests include gender issues in the history of Judaism, especially the gendered perception of the ascetic life and its implications for the Jewish mystical tradition. She is completing a book entitled Female Bodies - Male Souls: Asceticism and Gender in the Jewish Mystical Tradition. Her study of the exceptional prominence of women in the 17th-century messianic heresy of Sabbatai Zevi, including its 18th-century sectarian ofshoots, was published in 2011 as Women and the Messianic Heresy of Sabbatai Zevi, 1666-1816.  Professor Rapoport-Albert directed a major 5-year AHRC-funded research project on the linguistic (largely Aramaic) and literary context of the Zohar - the most influential literary product of the medieval Kabbalah