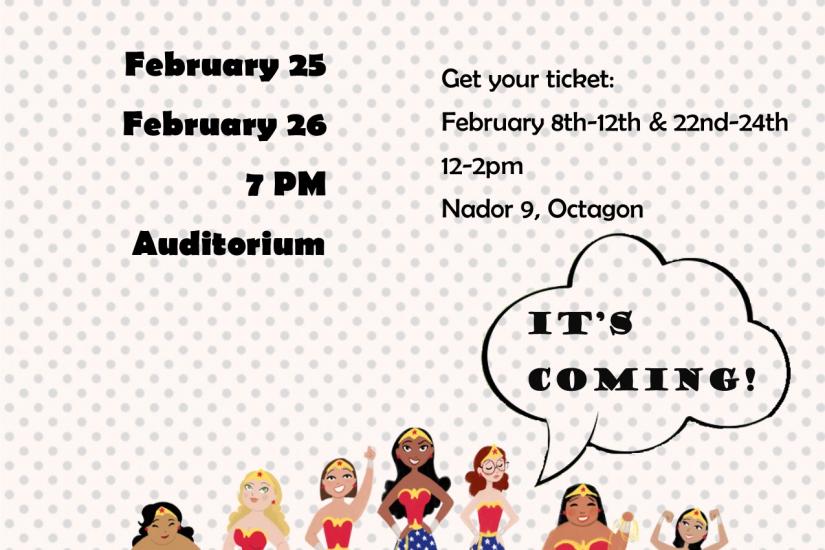 Save the date - it is The Vagina Monologues season!

The Human RightS Initiative proudly invites you to CEU's annual benefit production of Eve Ensler's award winning theatrical performance, The Vagina Monologues.
The play is based on interviews with over 200 women and is the part of the global V-day campaign. The Vagina Monologues will be staged at Central European University for the 8th time.

The dates of the performance:

All proceeds will be donated to a local shelter or organization that serves women and girls.

To get your ticket, stop by our infotable between February 8-12 & February 22-24, from 12 pm to 2 pm, in the Octagon Area, Nador 9 building. You can also reserve your ticket via our Facebook event (https://www.facebook.com/events/447424415456355/) and get it from our office. We are located on the 1st floor, Faculty Tower, passageway to OSF building.

Please note, that the number of the seats for the performance is limited.

About the Vagina Monologues

THE VAGINA MONOLOGUES  is the award-winning play is based on V-Day Founder/playwright Eve Ensler's interviews with more than 200 women. With humor and grace the piece celebrates women’s sexuality and strength. Through this play and the liberation of this one word, countless women throughout the world have taken control of their bodies and their lives. For more than twelve years, The Vagina Monologues has given voice to experiences and feelings not previously exposed in public.

V-Day (www.vday.org) is a global activist movement to end violence against women and girls that raises funds and awareness through benefit productions of Playwright/Founder Eve Ensler's award winning play The Vagina Monologues and other artistic works. In 2011, over 5,800 V-Day benefit events took place produced by volunteer activists in the U.S. and around the world, educating millions of people about the reality of violence against women and girls. To date, the V-Day movement has raised over $85 million and educated millions about the issue of violence against women and the efforts to end it, crafted international educational, media and PSA campaigns, launched the Karama program in the Middle East, reopened shelters, and funded over 13,000 community-based anti-violence programs and safe houses in Democratic Republic Of Congo, Haiti, Kenya, South Dakota, Egypt, and Iraq. In 2001, V-Day was named one of Worth Magazine's "100 Best Charities," in 2006 one of Marie Claire Magazine's Top Ten Charities, and in 2010 was named as one of the Top-Rated organizations on Great Nonprofits.

What is a V-Day  Campaign?

A V-Day Campaign is a catalyst for mobilizing women and men to heighten awareness about violence against women and girls.  By creating this global community, V-Day strives to empower women to find their collective voices and demand an end to the violence that affects one in three women in the U.S and around the world.