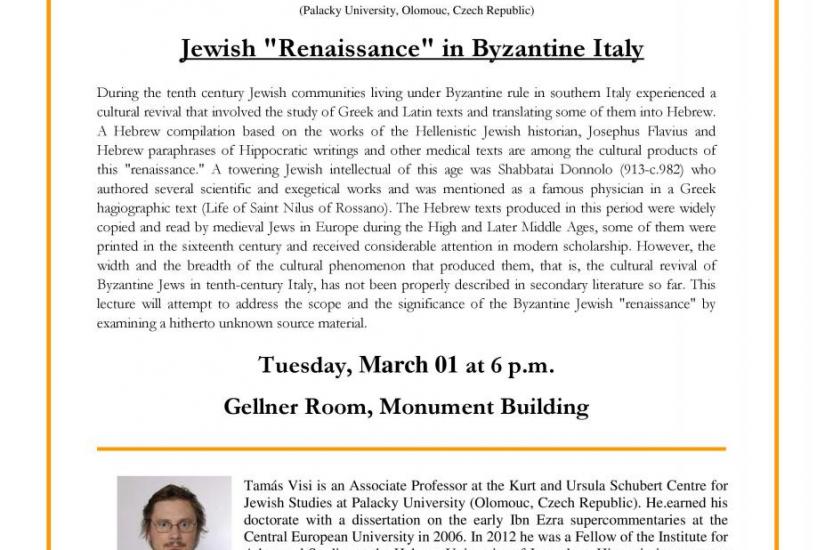 During the tenth century Jewish communities living under Byzantine rule in southern Italy experienced a cultural revival that involved the study of Greek and Latin texts and translating some of them into Hebrew. A Hebrew compilation based on the works of the Hellenistic Jewish historian, Josephus Flavius and Hebrew paraphrases of Hippocratic writings and other medical texts are among the cultural products of this "renaissance." A towering Jewish intellectual of this age was Shabbatai Donnolo (913-c.982) who authored several scientific and exegetical works and was mentioned as a famous physician in a Greek hagiographic text (Life of Saint Nilus of Rossano). The Hebrew texts produced in this period were widely copied and read by medieval Jews in Europe during the High and Later Middle Ages, some of them were printed in the sixteenth century and received considerable attention in modern scholarship. However, the width and the breadth of the cultural phenomenon that produced them, that is, the cultural revival of Byzantine Jews in tenth-century Italy, has not been properly described in secondary literature so far. This lecture will attempt to address the scope and the significance of the Byzantine Jewish "renaissance" by examining a hitherto unknown source material.

Tamás Visi is an Associate Professor at the Kurt and Ursula Schubert Centre for Jewish Studies at Palacky University (Olomouc, Czech Republic). He earned his doctorate with a dissertation on the early Ibn Ezra supercommentaries at the Central European University in 2006. In 2012 he was a Fellow of the Institute for Advanced Studies at the Hebrew University of Jerusalem. His main interests are Moravian Jewish history, (especially rabbinic literature and other Hebrew sources), medieval Jewish philosophy and intellectual history