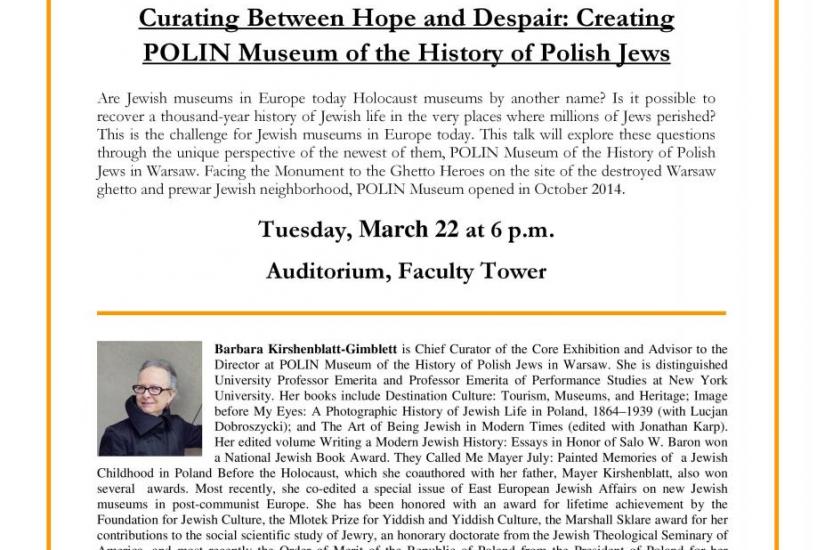 Curating Between Hope and Despair: Creating POLIN Museum of the History of Polish JewsAre Jewish museums in Europe today Holocaust museums by another name? Is it possible to recover a thousand-year history of Jewish life in the very places where millions of Jews perished? This is the challenge for Jewish museums in Europe today. This talk will explore these questions through the unique perspective of the newest of them, POLIN Museum of the History of Polish Jews in Warsaw. Facing the Monument to the Ghetto Heroes on the site of the destroyed Warsaw ghetto and prewar Jewish neighborhood, POLIN Museum opened inOctober 2014.

Barbara Kirshenblatt-Gimblett is Chief Curator of the Core Exhibition and Advisor to the Director at POLIN Museum of the History of Polish Jews in Warsaw. She is distinguished University Professor Emerita and Professor Emerita of Performance Studies at New York University. Her books include Destination Culture: Tourism, Museums, and Heritage; Image before My Eyes: A Photographic History of Jewish Life in Poland, 1864–1939 (with Lucjan Dobroszycki); and The Art of Being Jewish in Modern Times (edited with Jonathan Karp). Her edited volume Writing a Modern Jewish History: Essays in Honor of Salo W. Baron won a National Jewish Book Award. They Called Me Mayer July: Painted Memories of a Jewish Childhood in Poland Before the Holocaust, which she coauthored with her father, Mayer Kirshenblatt, also won several awards. Most recently, she co-edited a special issue of East European Jewish Affairs on new Jewish museums in post-communist Europe. She has been honored with an award for lifetime achievement by the Foundation for Jewish Culture, the Mlotek Prize for Yiddish and Yiddish Culture, the Marshall Sklare award for her contributions to the social scientific study of Jewry, an honorary doctorate from the Jewish Theological Seminary of America, and most recently the Order of Merit of the Republic of Poland from the President of Poland for her contribution to the creation of POLIN Museum. She is on the Board of the Association of the Jewish Historical Institute of Poland and currently serves on advisory boards for the YIVO Institute for Jewish Research, Council of American Jewish Museums, Vienna Jewish Museum, Berlin Jewish Museum, and Jewish Museum and Tolerance Center in Moscow.