Screening of Black Box’s “The Facility” 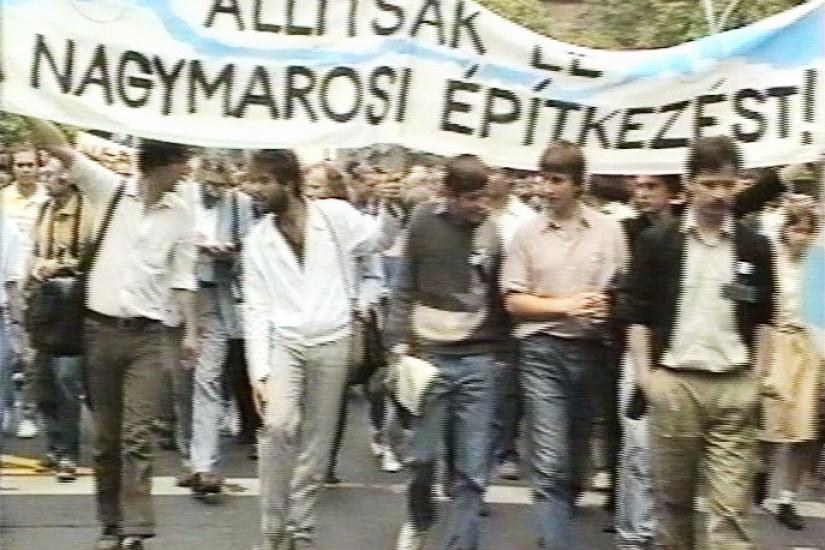 INVITATION to the third event of the POLITICISED LANDSCAPES program

Discussion with the Directors, Adam Csillag and Marta Elbert

Moderated by: Szilvia Nagy (The discussion is in Hungarian)

The screening is part of the POLITICIZED LANDSCAPE series organized in conjunction with the exhibition SOME KIND OF OPPOSITION by Axel Braun.

The Black Box video workshop was founded by Judit Ember, Marta Elbert, Istvan Javor, Andras Lanyi and Gabor Vagi in 1987. The documentary video journal produced its samizdat publications on VHS. As a civil organization they followed the events of the regime change and the National Round Table Negotiations.

This evening the second issue of the video journal entitled, The Facility (vol. 1, issue 2), will be screened.

The documentary, filmed in the summer of 1988, shows the first mass demonstration against the Bos-Gabcíkovo Dam System, the transformation of the beautiful Danube landscape into barren desert, the efforts of archeologists to save artifacts before the fields were to be flooded, and an interview with Professor Bela Liptak who argues against the dam’s construction.

Before the film there will be a discussion with Marta Elbert and Adam Csillag on the documentation of political and social events in the past and present, the documentarist-activist approach and the role of un-copyrighted photos and films in democratic movements and expression of opinions.

After working for 20 years as both unit and production manager, Elbert became one of the founding editors of Black Box, which provided the most important video-documentary workshops on the political and social events during the regime changes in Hungary and Eastern Europe. She was the editor of the five-part film compiled from the recordings of the Oppositional and National Round Table negotiations. She was the editor, reporter and producer of close to 130 Black Box films as well as the founder of the Roma Media School where she taught too. She was awarded the Pulitzer Memorial Prize

Adam Csillag is an outstanding Hungarian documentary filmmaker. He graduated from the University of Theater and Film Arts in Budapest in 1984 and ever since he has worked as a documentary film maker. He first worked at the Balazs Bela Studio, where he made the successful documentary, Dunasaur. From 1989 he worked for Hungarian Television, where he filmed the Velvet Revolution in Prague. Csillag participated in the MTV Opal Productions in 1990, developing programs on human rights, minorities, and social issues for television. Adam Csillag is a member of the Ethics Committee for the Association of Hungarian Film and TV Artists, and he is also on the Board of Duna Kor.