The Notions of Popular Power in the Late Roman Republic 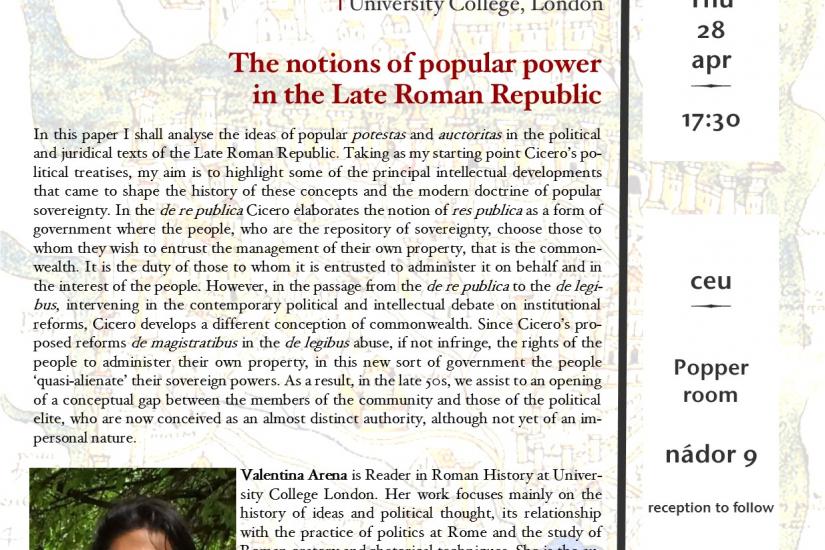 In this paper I shall analyse the ideas of popular potestas and auctoritas in the political and juridical texts of the Late Roman Republic. Taking as my starting point Cicero’s political treatises, my aim is to highlight some of the principal intellectual developments that came to shape the history of these concepts and the modern doctrine of popular sovereignty. In the de re publica Cicero elaborates the notion of res publica as a form of government where the people, who are the repository of sovereignty, choose those to whom they wish to entrust the management of their own property, that is the commonwealth. It is the duty of those to whom it is entrusted to administer it on behalf and in the interest of the people. However, in the passage from the de re publica to the de legibus, intervening in the contemporary political and intellectual debate on institutional reforms, Cicero develops a different conception of commonwealth. Since Cicero’s proposed reforms de magistratibus in the de legibus abuse, if not infringe, the rights of the people to administer their own property, in this new sort of government the people ‘quasi-alienate’ their sovereign powers. As a result, in the late 50s, we assist to an opening of a conceptual gap between the members of the community and those of the political elite, who are now conceived as an almost distinct authority, although not yet of an impersonal nature.

Valentina Arena is Reader in Roman History at University College London. Her work focuses mainly on the history of ideas and political thought, its relationship with the practice of politics at Rome and the study of Roman oratory and rhetorical techniques. She is the author of Libertas and the Practice of Politics in the late Roman Republic (Cambridge University Press 2012) and the editor of the forthcoming Liberty: an Ancient Concept for the Contemporary World (special issue of Journal of the History of European Ideas 2016), the first comparative study of the ancient notions of liberty in the interconnected societies of the Near East, Greece, and Rome, which aims to establish the potential impact of the ancient intellectual world on contemporary political debates. She is also currently co-editing the Companion to Roman Political Culture and a volume on the intellectual contribution of Varro. She has been member of several international research projects covering a wide range of subjects, such as popular sovereignty, ancient republicanism, cultures of voting, Roman trials, and senatus consulta. Her essays have appeared in a wide range of scholarly journals and edited volumes.