The Theory of Apokatastasis: Research Conducted, in Progress, and Planned 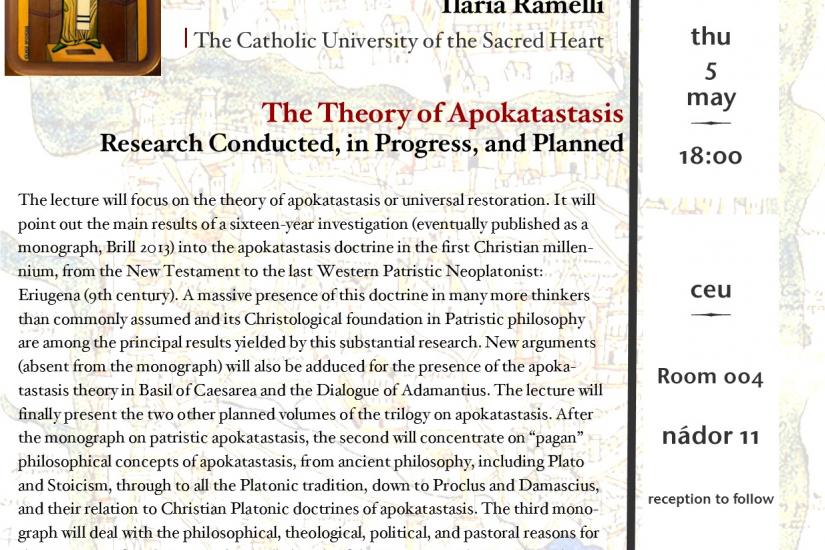 The lecture will focus on the theory of apokatastasis or universal restoration. It will point out the main results of a sixteen-year investigation (eventually published as a monograph, Brill 2013) into the apokatastasis doctrine in the first Christian millennium, from the New Testament to the last Western Patristic Neoplatonist: Eriugena (9th century). A massive presence of this doctrine in many more thinkers than commonly assumed and its Christological foundation in Patristic philosophy are among the principal results yielded by this substantial research. New arguments (absent from the monograph) will also be adduced for the presence of the apokatastasis theory in Basil of Caesarea and the Dialogue of Adamantius. The lecture will finally present the two other planned volumes of the trilogy on apokatastasis. After the monograph on patristic apokatastasis, the second will concentrate on “pagan” philosophical concepts of apokatastasis, from ancient philosophy, including Plato and Stoicism, through to all the Platonic tradition, down to Proclus and Damascius, and their relation to Christian Platonic doctrines of apokatastasis. The third monograph will deal with the philosophical, theological, political, and pastoral reasons for the rejection of apokatastasis by the “Church of the Empire” in the East (mainly under Justinian’s influence) and the West (mainly under Augustine’s).

She sits on many directive and scientific boards of academic series and journals and numerous international scholarly associations. She regularly serves as peer reviewer for top scientific series and journals, and as a scientific consultant in tenure/hiring evaluations for outstanding Universities, and in advanced research funding for first-rate Foundations and Universities. She has taught courses and seminars, delivered invited lectures and conferences, and held senior research fellowships and senior visiting professorships at topmost Universities in Europe, North America, and Israel. She authored numerous books and essays in leading scholarly journals/series, on ancient and patristic philosophy/theology and late antiquity.