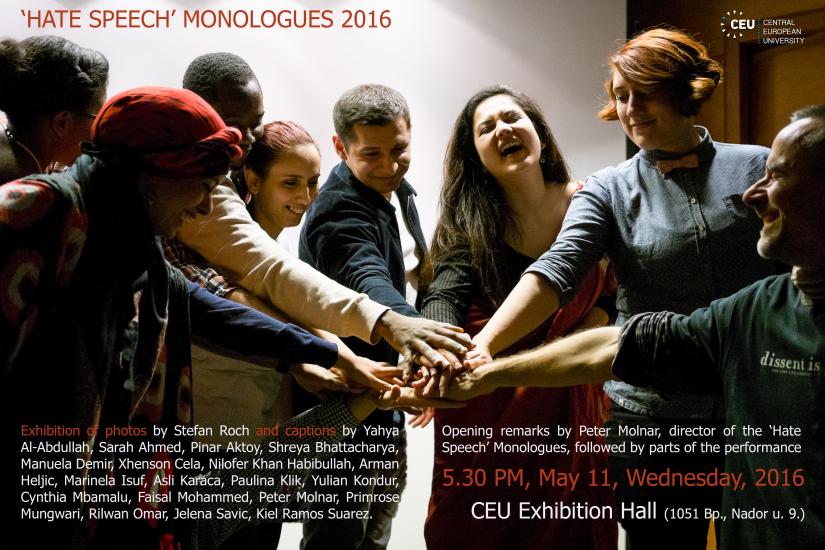 Opening remarks by Peter Molnar, director of the 'Hate Speech' Monologues. Parts of the performances. Reception to follow!

Please see the video of this year's March performance of the "Hate Speech" Monologues: https://www.youtube.com/watch?v=uiIGAxAX5XA

The ‘Hate Speech’ Monologues is a participatory theatrical performance, and one of the few artistic and conversational platforms at CEU where students reflect on prejudices and discrimination that they engage personally and academically. The ‘Hate Speech’ Monologues was invented and has been conceived and directed since 2012 by free speech scholar and performer Peter Molnar and performed by the CEU students and Molnar himself. Initially an optional part of Molnar’s course “Enabling Policies for Responding to ‘Hate Speech’”, it has become a campus tradition performed each March, as well as during orientation week to welcome and raise awareness among incoming students. The project has been supported by the Student Union since 2014 and by the CEU Humanities Project since 2016. Building on the exceptional diversity at CEU, the ‘Hate Speech’ Monologues aims to strengthen the human connections and mutual respect in the CEU community.

In March 2016, Kiel Ramos Suarez projected the pictures for the performance and Sotiris Bekas video recorded it.

This exhibition is supported by the Center for Arts and Culture and the Student Union.