Kálmán Mizsei - STATE SURVIVAL AND THE RULE-OF-LAW. GOVERNMENT CRISIS IN UKRAINE AND MOLDOVA 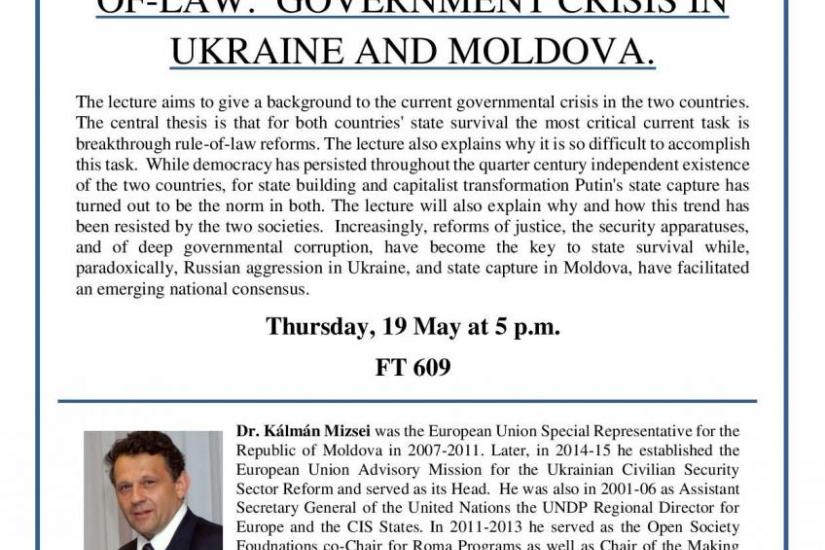 STATE SURVIVAL AND THE RULE-OF-LAW.  GOVERNMENT CRISIS IN UKRAINE AND MOLDOVA.

The lecture aims to give a background to the current governmental crisis in the two countries.  The central thesis is that for both countries' state survival the most critical current task is breakthrough rule-of-law reforms. The lecture also explains why it is so difficult to accomplish this task.  While democracy has persisted throughout the quarter century independent existence of the two countries, for state building and capitalist transformation Putin's state capture has turned out to be the norm in both. The lecture will also explain why and how this trend has been resisted by the two societies.  Increasingly, reforms of justice, the security apparatuses, and of deep governmental corruption, have become the key to state survival while, paradoxically, Russian aggression in Ukraine, and state capture in Moldova, have facilitated an emerging national consensus.

Dr. Kálmán Mizsei was the European Union Special Representative for the Republic of Moldova in 2007-2011. Later, in 2014-15 he established the European Union Advisory Mission for the Ukrainian Civilian Security Sector Reform and served as its Head.  He was also in 2001-06 as Assistant Secretary General of the United Nations the UNDP Regional Director for Europe and the CIS States. In 2011-2013 he served as the Open Society Foudnations co-Chair for Roma Programs as well as Chair of the Making the Most of EU Funds for the Roma Program. Dr. Mizsei has also been lecturing at the Central European University since 2007, among other things on Globalization and Global Governance and the Tripe Transitions of East European states. He is currently at the CEU Nationalism Studies Department with an Open Society Foundations research grant.