Rakı Consumption and Production in Istanbul 19th and 21st Centuries 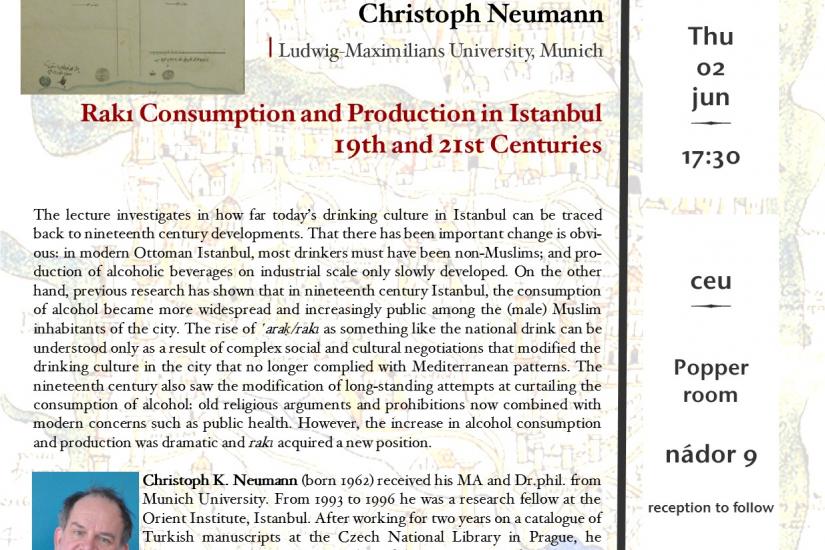 The lecture investigates in how far today’s drinking culture in Istanbul can be traced back to nineteenth century developments. That there has been important change is obvious: in modern Ottoman Istanbul, most drinkers must have been non-Muslims; and production of alcoholic beverages on industrial scale only slowly developed. On the other hand, previous research has shown that in nineteenth century Istanbul, the consumption of alcohol became more widespread and increasingly public among the (male) Muslim inhabitants of the city. The rise of ʽaraḳ/rakı as something like the national drink can be understood only as a result of complex social and cultural negotiations that modified the drinking culture in the city that no longer complied with Mediterranean patterns. The nineteenth century also saw the modification of long-standing attempts at curtailing the consumption of alcohol: old religious arguments and prohibitions now combined with modern concerns such as public health. However, the increase in alcohol consumption and production was dramatic and rakı acquired a new position.

Christoph K. Neumann (born 1962) received his MA and Dr.phil. from Munich University. From 1993 to 1996 he was a research fellow at the Orient Institute, Istanbul. After working for two years on a catalogue of Turkish manuscripts at the Czech National Library in Prague, he became, in October 1998, a member of the Department of Humanities and Social Sciences at Istanbul Technical University. From 2002 to 2008 he served at the History Department at Istanbul Bilgi University. Since 2008 he is chair of Turkish Studies at Munich University. He has published on Ottoman historiography, Ottoman social and cultural history, the urban history of Istanbul, political culture and memory in the Republic of Turkey and Turkish fictional literature and has translated novels and short stories from Turkish to German. Recent articles are, among others, “Orientalist Poetics, Autobiographical Fiction, and History Defying Words: Sarkis Torossian Inscri­bing Himself into World War I.” Globalizing Literary Genres: Literature, History, Moder­nity, ed. J. Habjan and F. Imlinger (New York, London: Routledge, 2016), 128-40, and “The Russian Experience: Necati Efendi in Captivity.” In Südost-Forschungen 71 (2012), 19-33.