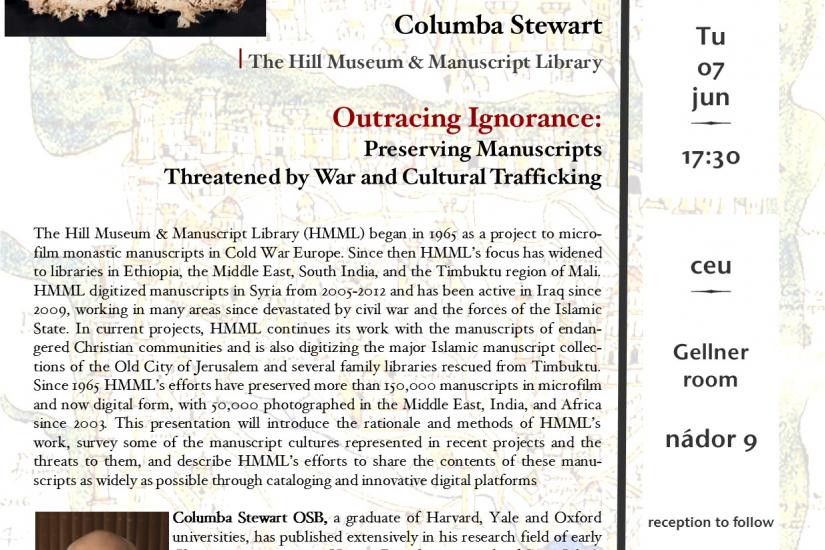 The Hill Museum & Manuscript Library (HMML) began in 1965 as a project to microfilm monastic manuscripts in Cold War Europe. Since then HMML’s focus has widened to libraries in Ethiopia, the Middle East, South India, and the Timbuktu region of Mali. HMML digitized manuscripts in Syria from 2005-2012 and has been active in Iraq since 2009, working in many areas since devastated by civil war and the forces of the Islamic State. In current projects, HMML continues its work with the manuscripts of endangered Christian communities and is also digitizing the major Islamic manuscript collections of the Old City of Jerusalem and several family libraries rescued from Timbuktu. Since 1965 HMML’s efforts have preserved more than 150,000 manuscripts in microfilm and now digital form, with 50,000 photographed in the Middle East, India, and Africa since 2003. This presentation will introduce the rationale and methods of HMML’s work, survey some of the manuscript cultures represented in recent projects and the threats to them, and describe HMML’s efforts to share the contents of these manuscripts as widely as possible through cataloging and innovative digital platforms

Columba Stewart OSB, a graduate of Harvard, Yale and Oxford universities, has published extensively in his research field of early Christian monasticism. He is a Benedictine monk of Saint John’s Abbey, Collegeville, Minnesota, USA, and professor of theology at Saint John's School of Theology and Seminary. Since 2003, he has served as executive director of the Hill Museum & Manuscript Library (HMML), a global organization sponsored by Saint John’s University that is the world’s leader in digital manuscript preservation. Stewart has developed HMML’s extensive manuscript digitization initiatives in historic Christian and Muslim communities in the Middle East, Eastern Europe, India and Africa. In the coming academic year, he will be in residence at the Institute for Advanced Study in Princeton, New Jersey, and is the recipient of a 2016 Guggenheim Fellowship for his project to write a new history of the first thousand years of Christian monasticism.