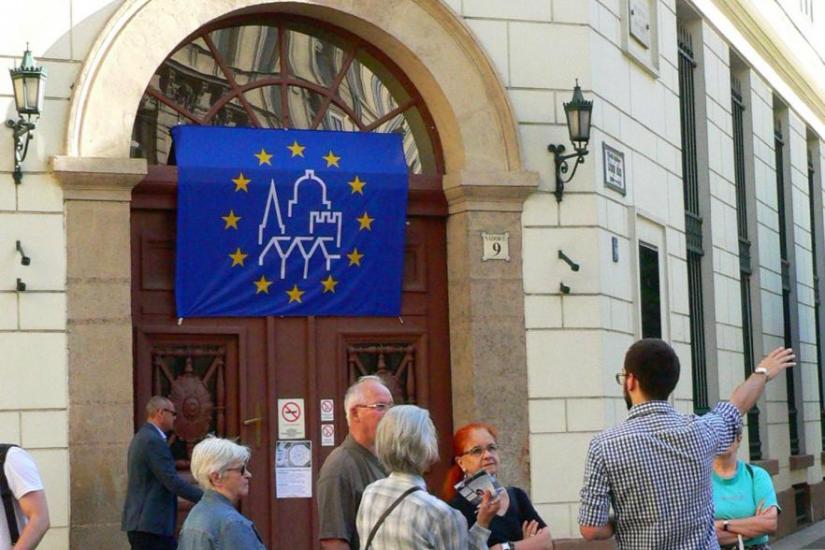 The European Heritage Days are the most widely celebrated participatory cultural event shared by the citizens of Europe.  The Council of Europe launched the initiative in 1985, and in 1999 was joined by the European Union to create the joint action, which has continued up to the present day. Held in September each year, EHDs events – often called Heritage Open Days - take place in the 50 countries party to the European Cultural Convention. During this time, doors are opened to numerous monuments and sites, allowing Europe’s citizens to enjoy free visits and learn about their shared cultural heritage and encouraging them to become actively involved in the safeguard and enhancement of this heritage for present and future generations.

This is the fourth time that CEU opens its doors for visitors and presents the heritage value and history of its buildings both for visitors and for members of its own community.  We offer thematic guided tours in English and in Hungarian, and we invite Hungarian speakers for a roundtable discussion on the role of amateur metal detectorists in researching and safeguarding archaeological heritage in Hungary connected to one of the common themes of European Heritage Days in Hungary: Heritage and Community.

Guided tours:
The entrance to all programs in the CEU campus is the main entrance of 9 Nador Street, at the corner of Nador Street and Zrínyi Street. The tours take about one hour.

Saturday, 17 September, 14:00 - Guided tour in Nador 9 and 11 by Mihaela Groza, in English
Title: The Historical Buildings of 9 and 11 Nador Street in the Communist Era
The “Monument Building” of the CEU complex at 9 Nador Street was originally constructed for the Festetics family in the 1820-30s. The Art Nouveau apartment house at 11 Nador Street was also built by members of the same family, in 1914-15. The history of the Festetics palace is in many ways representative of Hungary’s 19th and 20th century history. In the second half of the 19th century a transition towards capitalism was underway in Hungary, thus the building found itself in the financial center of Budapest. The family adapted to this situation, renting the building to a bank and accommodating a shop on the ground floor. 11 Nador Street offered homes to the employees of the nearby companies and enterprises. In 1945, the state nationalized the buildings, and the palace was restored for the use of the Military Intelligence Unit. The top floors of the palace were offices, while the basement was used as a prison. After 1948 it was used by various administrative organs of the state. The walk guides visitors over the history of the two buildings with special emphasis on the period from 1945 until the 1990s, when they were incorporated into the campus of the Central European University.

Sunday, 18 September, 14:00 My Personal CEU. Guided tour in Nador 9 and 11 by Mihály Orsós and Gábor Vidák, in English

Sunday, 18 September, 17:00 - Guided tour n Nador 9 and Október 6 Street 7 by Dóra Mérai, in English
Title: Neo-Classisist Palaces in the Building Complex of CEU
The part of Budapest called Inner Leopold Town started to gain an urban character from the first decades of the 19th century. The earliest buildings that are still standing here were constructed as urban palaces for noble families. Many of these were designed by the most prominent architects of Neo-Classicism in Hungary. The “Monument Building” of the CEU complex was originally constructed for the Festetics family in the 1820-30s, by Mihály Pollack, later architect of the Hungarian National Museum. The university is currently moving into the building at 13 Nador Street designed by József Hild. The former Marczibányi Palace at 7 Október 6 Street also houses some units of CEU now. The guided tour takes the visitors into this palace as well, which was designed by József Hild too, and preserved some original details – frescoes, furniture – on the upper levels otherwise closed from the broader public.