The Saints of Cyprus in Late Antiquity 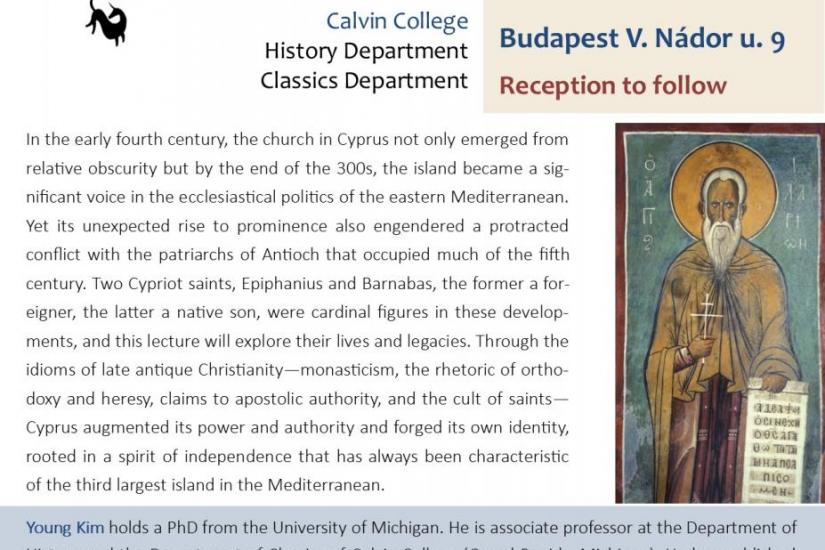 Cyprus was highly coveted in antiquity for its abundant natural resources—timber, gypsum, salt, and of course, copper.  The island was most famous as the ‘birthplace’ of Aphrodite, and it enjoyed prosperity and widespread interest for its sanctuary dedicated to the goddess, and the two main ports, Salamis and Paphos, were important stops in the trade network that crisscrossed the eastern Mediterranean.  Under Roman rule, however, Cyprus was a fairly unimportant province, overshadowed in strategic value by mainland territories, and the low political status of the island was diminished further during the reign of Diocletian, when it was placed under the administrative oversight of imperial officials based in Antioch.

Christianity in Cyprus seemed to have a very promising start.  It was an important locale in the Apostle Paul’s first missionary journey, during which he and his companions famously confronted a Jewish magician and converted Sergius Paulus, the proconsul of the island.  After the early second century, however, virtually nothing can be discerned from both the written and material record about the Christians there.  But in early the fourth century, the church in Cyprus not only emerged from relative obscurity but by the end of the 300s, the island became a significant voice in the ecclesiastical politics of the eastern Mediterranean.  Yet its unexpected rise to prominence also engendered a protracted conflict with the patriarchs of Antioch that occupied much of the fifth century.  Two Cypriot saints, Epiphanius and Barnabas, the former a foreigner, the latter a native son, were cardinal figures in these developments, and this lecture will explore their lives and legacies.  Through the idioms of late antique Christianity—monasticism, the rhetoric of orthodoxy and heresy, claims to apostolic authority, and the cult of saints—Cyprus augmented its power and authority and forged its own identity, rooted in a spirit of independence that has always been characteristic of the third largest island in the Mediterranean.

Young Kim holds a PhD from the University of Michigan. He is associate professor at the Department of History and the Department of Classics of Calvin College (Grand Rapids, Michigan). He has published extensively on Epiphanius of Cyprus and late antique heresy. In his most recent book, Epiphanius of Cyprus: Imagining an Orthodox World (published by The University of Michigan Press in 2015), Kim offers a critical biography of this debated church father and his intellectual accomplishments. The book was awarded the North American Patristics Society's Best First Book Prize in 2016. Professor Kim was awarded a Cyprus American Archaeological Research Institute/Council of American Overseas Re-search Centers Research Fellowship, and has given papers at prestigious institutions, including the Harvard Divinity School and the University of Michigan.