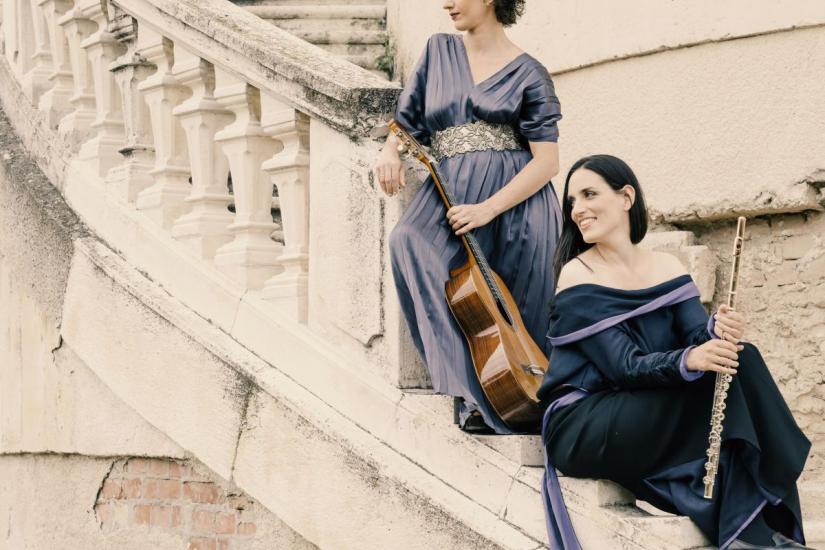 THE CLASSICAL FLUTE AND GUITAR PROJECT

Noémi Győri and Katalin Koltai introduce their ‘Classical flute and guitar project’, a new formation introducing their own transcriptions of Viennese classical keyboard works and musical rarities from the late 18th and early 19th centuries. The lecture-recital will provide insight into the history of the flute-guitar formation and the fundamental role of Vienna and its vibrant musical life in the evolution of the duo. Additionally, through musical demonstrations and their performance of works by Mozart, Haydn and Nava, Noémi and Katalin provide the audience with the possibility to sneak a peak into their rehearsal laboratory and gain better understanding of various musical textures, of key elements of chamber music playing, and the capabilities of the flute and the guitar by challenging the two instruments with a repertoire and a style of detailed and articulate chamber music performance which is traditionally associated with string and keyboard instruments.

Noémi Győri and Katalin Koltai have been playing together for over fifteen years and founded the Dialogue Duo during their first year of studies at the Liszt Academy of Music in Budapest in 2002. They have performed across Europe at festivals such as the Kuhmo Chamber Music Festival in Finland, the Thy Chamber Music Festival in Denmark and the Rhodes International Festival Greece, and they actively collaborated with composers in Hungary, premiering new works dedicated to the formation.

In 2011, through collaboration with musicologist-guitarist Massimo Agostinelli, Noémi and Katalin discovered a large and valuable original oeuvre of the Italian composer Antonio Nava (1775-1826) which had not previously been published or recorded. Based these findings, the Dialogue Duo recorded their first album featuring these before unknown works by Nava. The album was released in the “World Premier Recordings” series of Hungaroton and gained widespread international critical acclaim.

The thorough research of Nava’s music enabled the Dialogue Duo to gain elaborate knowledge of the flute-guitar music of the era and to study further resources in order to produce a new repertoire through 18th and 19th-century transcriptions. As a result, Noemi and Katalin turned towards Viennese classical keyboard works and launched the “Classical flute and guitar project.” Through the project, they set out to reshape the perception of the flute and guitar duo by presenting unique recital programmes, featuring their own transcriptions of keyboard masterworks and historical publications.

Noémi Győri has performed extensively as a soloist and chamber musician at major international festivals in 28 countries. Noémi is principal flautist of the Orchester Jakobsplatz Munich and has been playing as a guest in outstanding orchestras such as the BBC Philharmonic and the Vienna Philharmonic (Vienna State Opera). She has graduated with honors from the Ferenc Liszt Academy of Music as a student of Prof. Henrik Prőhle in 2007. She has completed post-gradual studies at the University of Music and Performing Arts in Vienna and at the Hochschule für Musik und Theater München.

Noémi gave her Carnegie Hall debut in 2011 as a First Prize Winner of the Alexander & Buono International Flute Competition. As recognition towards her artistic achievements she was awarded the European Cultural Prize for Young Artists (2011), the Career Prize of the Salon de Virtuosi Foundation New York (2012), the Performers’ Prize of the Artisjus Music Foundation Hungary (2006 and 2009) and has also been chosen three times  an “Annie Fischer Scholar” of the Filharmónia Budapest.

Noémi is currently pursuing her doctorate in Performance Practice at the Royal Academy of Music in London, supported by the Philipp Loubser Foundation, being the first flautist of the programme, working on her “Classical flute and guitar” project.

Being the only emerging artist of the Miyazawa Flutes in Europe, Noémi plays a LaFin headjoint and a 14K gold Miyazawa Boston flute sponsored by the Solti and the Philip Loubser Foundations.

Katalin Koltai began to play classical guitar at the age of 7. She pursued her studies at the Liszt Academy of Music in Budapest, the Royal Conservatory of Bruxelles and at the Conservatorium Maastricht. She gained her Masters degree in 2007 as a classical guitar soloist.

Katalin regularly performs in recitals throughout Europe; both as a soloist and a chamber musician. She has appeared at such prestigious festivals and venues as the Festival for the Interpretation of Spanish Song in Granada, the Kuhmo Chamber Music Festival, the Greenwich International Early Music Festival, Esterháza Haydn Festival. Since 2008 she has been the solo guitarist in the Orchestra of the Hungarian State Opera. Katalin is also recognized in the Hungarian theatre era. In 2010 she received the Junior Prima Prize (Hungary) for her artistic and pedagogical work.

Katalin’s first solo album was released in 2007. In 2008 she made recording for North/South Recordings and Naxos. In 2011 an album with the Dialogue Duo (HUNGAROTON),and in 2012, her disc with Barefoot Musicians was released. She has made further recordings for the Hungarian Bartók Radio.

Hermes is the god of travellers, and a symbolic figure of transition in classical mythology. Accordingly, the main idea behind the HerMeS public lecture series, organized jointly by the Cultural Heritage Studies Program and the Center for Arts and Culture at CEU, is to nurture and renewal of cultural heritage. The series offers its audience a combination of talks and concerts, allowing them to travel along the borderlands of the performing arts and academic lectures.