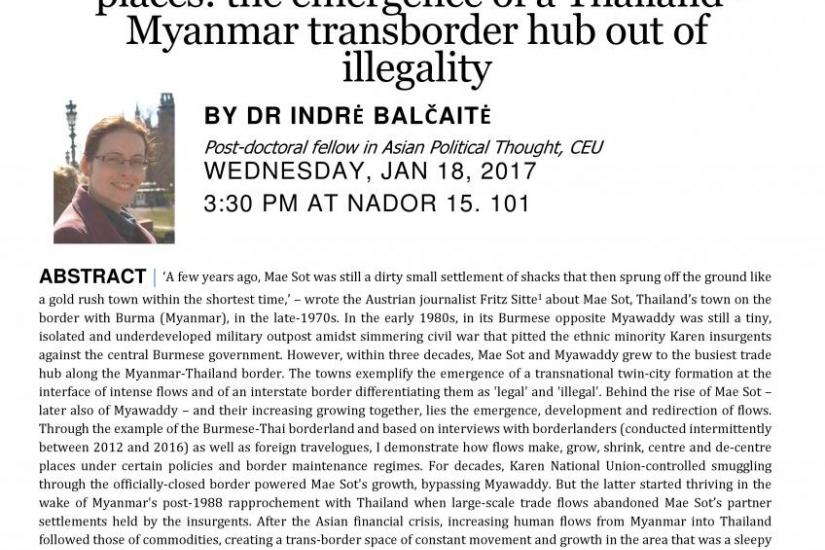 Abstract | ‘A few years ago, Mae Sot was still a dirty small settlement of shacks that then sprung off the ground like a gold rush town within the shortest time,’ – wrote the Austrian journalist Fritz Sitte[1] about Mae Sot, Thailand’s town on the border with Burma (Myanmar), in the late-1970s. In the early 1980s, in its Burmese opposite Myawaddy was still a tiny, isolated and underdeveloped military outpost amidst simmering civil war that pitted the ethnic minority Karen insurgents against the central Burmese government. However, within three decades, Mae Sot and Myawaddy grew to the busiest trade hub along the Myanmar-Thailand border. The towns exemplify the emergence of a transnational twin-city formation at the interface of intense flows and of an interstate border differentiating them as 'legal' and 'illegal'. Behind the rise of Mae Sot – later also of Myawaddy – and their increasing growing together, lies the emergence, development and redirection of flows. Through the example of the Burmese-Thai borderland and based on interviews with borderlanders (conducted intermittently between 2012 and 2016) as well as foreign travelogues, I demonstrate how flows make, grow, shrink, centre and de-centre places under certain policies and border maintenance regimes. For decades, Karen National Union-controlled smuggling through the officially-closed border powered Mae Sot's growth, bypassing Myawaddy. But the latter started thriving in the wake of Myanmar's post-1988 rapprochement with Thailand when large-scale trade flows abandoned Mae Sot’s partner settlements held by the insurgents. After the Asian financial crisis, increasing human flows from Myanmar into Thailand followed those of commodities, creating a trans-border space of constant movement and growth in the area that was a sleepy backwater prior to the 1960s.

Bio | Indrė Balčaitė joined the CEU Department of International Relations in 2015 as a post-doctoral fellow in Asian Political Thought. Indrė’s academic interests lie at the intersection of politics, anthropology and geography. She specialises in politics and society of Southeast Asia, particularly in Myanmar and Thailand. The current paper has grown out of her PhD research project (completed at the School of Oriental and African Studies, University of London) about the Karen migrants from Myanmar in Thailand and the interaction of human flows with state, ethnic, linguistic and religious boundaries.