The Botany of Death in Ancient Rome 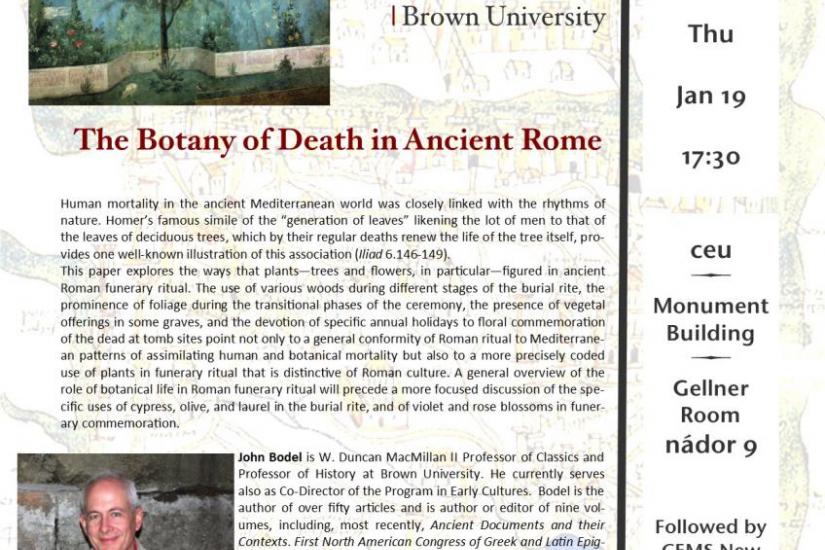 Human mortality in the ancient Mediterranean world was closely linked with the rhythms of nature. Homer’s famous simile of the “generation of leaves” likening the lot of men to that of the leaves of deciduous trees, which by their regular deaths renew the life of the tree itself, provides one well-known illustration of this association (Iliad 6.146-149).This paper explores the ways that plants—trees and flowers, in particular—figured in ancient Roman funerary ritual. The use of various woods during different stages of the burial rite, the prominence of foliage during the transitional phases of the ceremony, the presence of vegetal offerings in some graves, and the devotion of specific annual holidays to floral commemoration of the dead at tomb sites point not only to a general conformity of Roman ritual to Mediterranean patterns of assimilating human and botanical mortality but also to a more precisely coded use of plants in funerary ritual that is distinctive of Roman culture. A general overview of the role of botanical life in Roman funerary ritual will precede a more focused discussion of the specific uses of cypress, olive, and laurel in the burial rite, and of violet and rose blossoms in funerary commemoration.

John Bodel is W. Duncan MacMillan II Professor of Classics and Professor of History at Brown University. He currently serves also as Co-Director of the Program in Early Cultures. Bodel is the author of over fifty articles and is author or editor of nine volumes, including, most recently, Ancient Documents and their Contexts. First North American Congress of Greek and Latin Epigraphy (2011), with Nora Dimitrova (Boston 2015) and On Human Bondage: After Slavery and Social Death, with Walter Scheidel (Oxford 2016). His research focuses on ancient Roman social, economic, and cultural history, Roman epigraphy and Latin literature, especially of the empire. He has special interests in Roman religion, ancient slavery, funerals and burial customs, ancient writing systems, and Latin prose authors of the late Republic and early Empire. With Adele Scafuro, he edits the series Brill Studies in Greek and Roman Epigraphy, and since 1995, he has directed the U.S. Epigraphy Project, the purpose of which is to share information about Greek and Latin inscriptions in the USA (http://usepigraphy.brown.edu/).