The First Christian Emperor? Pitfalls and Aporiae in Recent Research on Constantine 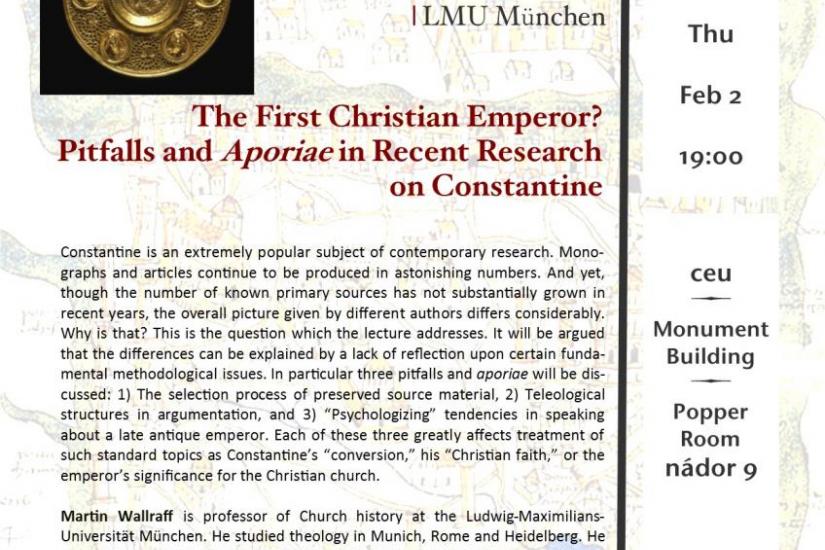 Constantine is an extremely popular subject of contemporary research. Monographs and articles continue to be produced in astonishing numbers. And yet, though the number of known primary sources has not substantially grown in recent years, the overall picture given by different authors differs considerably. Why is that?

This is the question which the lecture addresses. It will be argued that the differences can be explained by a lack of reflection upon certain fundamental methodological issues. In particular three pitfalls and aporiae will be discussed: 1) The selection process of preserved source material, 2) Teleological structures in argumentation, and 3) “Psychologizing” tendencies in speaking about a late antique emperor.

Each of these three greatly affects treatment of such standard topics as Constantine’s “conversion,” his “Christian faith,” or the emperor’s significance for the Christian church.

Martin Wallraff is professor of Church history at the Ludwig-Maximilians-Universität München. He studied theology in Munich, Rome and Heidelberg. He spent three years in Cambridge (UK) as a doctoral student. Subsequent steps of his career lead him to the universities of Bonn, Jena, and Basel. His primary field of specialization is the history of the Early Church (late antiquity, patristics). He published on the emperor Constantine, the relationship of Christianity with other religions, ecclesiastical historiography and other topics. He also worked as an editor of Greek texts (critical editions of Iulius Africanus, of the earliest biography of John Chrysostom, of the Church history of Gelasius of Caesarea). His current research focusses mainly on the textual transmission of the Greek New Testament.