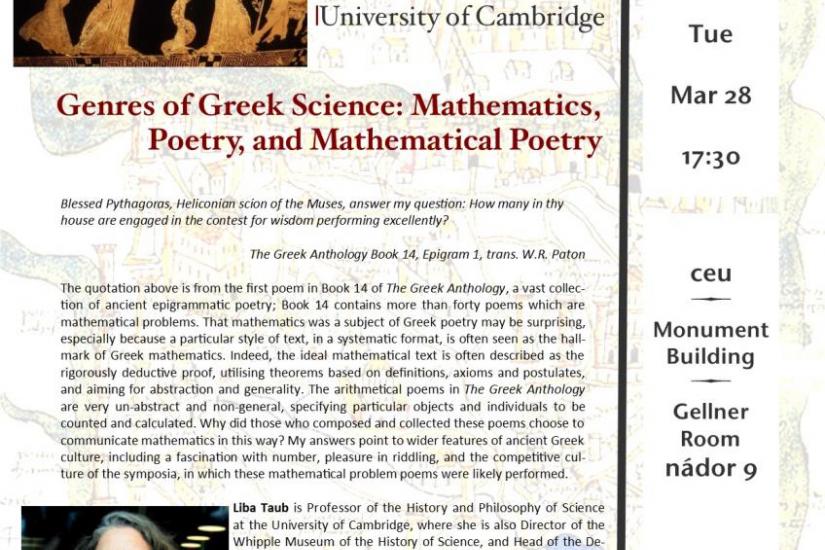 Blessed Pythagoras, Heliconian scion of the Muses, answer my question: How many in thy house are engaged in the contest for wisdom performing excellently?

The quotation above is from the first poem in Book 14 of The Greek Anthology, a vast collection of ancient epigrammatic poetry; Book 14 contains more than forty poems which are mathematical problems. That mathematics was a subject of Greek poetry may be surprising, especially because a particular style of text, in a systematic format, is often seen as the hallmark of Greek mathematics. Indeed, the ideal mathematical text is often described as the rigorously deductive proof, utilising theorems based on definitions, axioms and postulates, and aiming for abstraction and generality. The arithmetical poems in The Greek Anthology are very un-abstract and non-general, specifying particular objects and individuals to be counted and calculated. Why did those who composed and collected these poems choose to communicate mathematics in this way? My answers point to wider features of ancient Greek culture, including a fascination with number, pleasure in riddling, and the competitive culture of the symposia, in which these mathematical problem poems were likely performed.

Liba Taub is Professor of the History and Philosophy of Science at the University of Cambridge, where she is also Director of the Whipple Museum of the History of Science, and Head of the Department of History and Philosophy of Science. Her book Science Writing in Greco-Roman Antiquity will be published by Cambridge University Press in 2017. The author of Ptolemy's Universe: The Natural Philosophical and Ethical Foundations of Ptolemy's Astronomy (1993), Ancient Meteorology (2003), and Aetna and the Moon: Explaining Nature in Ancient Greece and Rome (2008), as well as many articles, she co-edited Authorial Voices in Greco-Roman Technical Writing (with Aude Doody, 2009) and Structures and Strategies in Ancient Greek and Roman Technical Writing (with Aude Doody and Sabine Föllinger, a special issue of Studies in History and Philosophy of Science, 2012). She is also a Fellow of Newnham College.