Michael of Ephesus' Account of the Nature and Physiology of Dreams 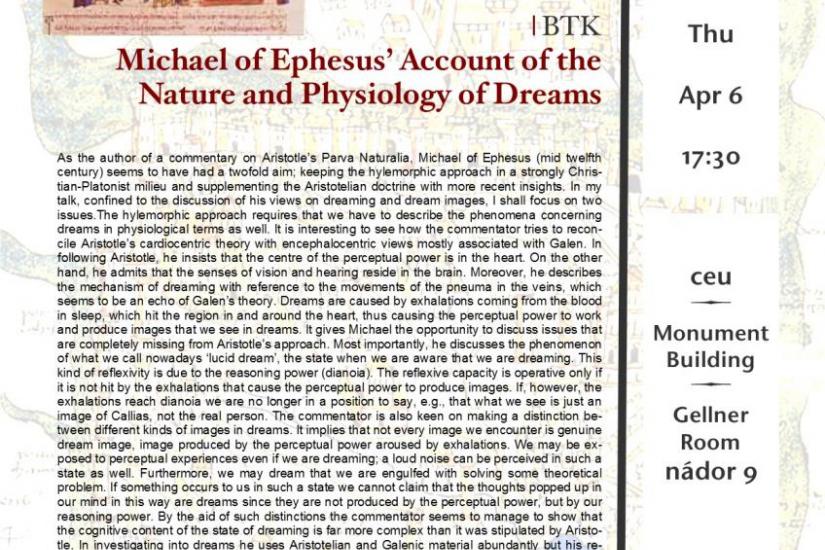 As the author of a commentary on Aristotle’s Parva Naturalia, Michael of Ephesus (mid twelfth century) seems to have had a twofold aim; keeping the hylemorphic approach in a strongly Christian-Platonist milieu and supplementing the Aristotelian doctrine with more recent insights. In my talk, confined to the discussion of his views on dreaming and dream images, I shall focus on two issues.
The hylemorphic approach requires that we have to describe the phenomena concerning dreams in physiological terms as well. It is interesting to see how the commentator tries to reconcile Aristotle’s cardiocentric theory with encephalocentric views mostly associated with Galen. In following Aristotle, he insists that the centre of the perceptual power is in the heart. On the other hand, he admits that the senses of vision and hearing reside in the brain. Moreover, he describes the mechanism of dreaming with reference to the movements of the pneuma in the veins, which seems to be an echo of Galen’s theory. Dreams are caused by exhalations coming from the blood in sleep, which hit the region in and around the heart, thus causing the perceptual power to work and produce images that we see in dreams. It gives Michael the opportunity to discuss issues that are completely missing from Aristotle’s approach. Most importantly, he discusses the phenomenon of what we call nowadays ‘lucid dream’, the state when we are aware that we are dreaming. This kind of reflexivity is due to the reasoning power (dianoia). The reflexive capacity is operative only if it is not hit by the exhalations that cause the perceptual power to produce images. If, however, the exhalations reach dianoia we are no longer in a position to say, e.g., that what we see is just an image of Callias, not the real person.
The commentator is also keen on making a distinction between different kinds of images in dreams. It implies that not every image we encounter is genuine dream image, image produced by the perceptual power aroused by exhalations. We may be exposed to perceptual experiences even if we are dreaming; a loud noise can be perceived in such a state as well. Furthermore, we may dream that we are engulfed with solving some theoretical problem. If something occurs to us in such a state we cannot claim that the thoughts popped up in our mind in this way are dreams since they are not produced by the perceptual power, but by our reasoning power. By the aid of such distinctions the commentator seems to manage to show that the cognitive content of the state of dreaming is far more complex than it was stipulated by Aristotle. In investigating into dreams he uses Aristotelian and Galenic material abundantly but his results are unique in an interesting way.

After having studied philosophy, classics and history at ELTE Budapest he went on to King's College London with a British Academy Fellowship. Here, since 1991 he has been involved in various capacities in the Ancient Commentators on Aristotle series; the latest volume he contributed to was the Solutiones ad Chosroem by Priscian of Lydia, which came out last summer. Since 2003 he has been reader in ancient philosophy at Pázmány Péter Catholic University in Budapest-Piliscsaba.
His main interest is in the epistemolgy and theories of the soul in pagan philosophy of late antiquity, on which he published extensively.