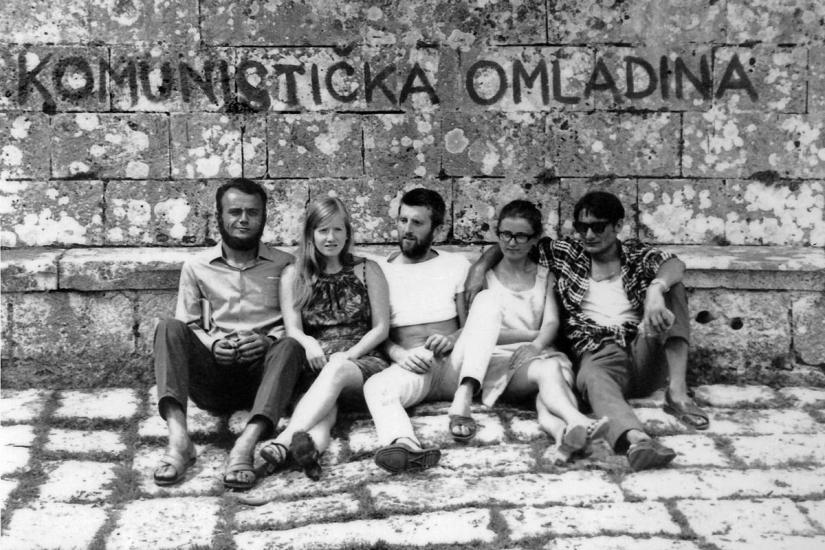 In 1968 students swarmed the streets, squares and universities of Europe with the slogan – Be realistic, demand the impossible! In former Yugoslavia the students also rose – mostly in Belgrade and Zagreb. In Belgrade they were rallying in the streets, clashing with the police. Some even lost their lives. In Zagreb, the uprising was mainly limited to the Student Centre and Faculty of Humanities and Social Sciences’ premises.

When the things got heated up and students grew quite impatient, Tito showed up. He ‘agreed’ with the students, criticised some comrades, promised an investigation and – the students called it a day, went on summer holidays, believing that ‘the revolution had won’. Naturally, nothing changed. It was all over. However, not on the island of Korčula, with yet another session of the Praxis summer school of philosophy. That summer, Korčula, Croatia and Yugoslavia were the centre of global philosophy. Minds like Ernst Bloch, Herbert Marcuse, Kostas Axelos, accompanied by a series of local philosophers, discusses the theme of ‘Marx and Revolution’.

The author of this film, Nenad Puhovski was there as a young philosophy student. But not just him… an entire generation of youngsters who would one way or another shape the future of this region was there on Korčula, having a formative experience.

A wake-up call followed: Russians entered Prague. It all came tumbling down. Philosophy was helpless… The film Generation ’68 speaks about these events, as well as events that happened before. The author makes use of them to pay a tribute to the generation he shares youthful enthusiasm with, and also challenges the actual stretch of these changes on the social and, more importantly, personal level. It is easy to have ideas; making them credible for the generations to follow is something much more difficult.

About the author of Generation '68:

Nenad Puhovski is one of the pivotal persons in the development of modern Croatian documentary film. He is the author and producer of awarded films and director of the biggest regional documentary film festival.

Nenad was born in 1949 in Zagreb, where he completed his primary and secondary education, the Faculty of Philosophy and Academy of Dramatic Arts (ADU). As a stage, film and TV director (amateur since 1965 and professional since 1973), he has directed over 250 productions. He has received a number of Croatian and international awards.

He worked as a dramaturgist of &TD Theater. As of 1980, he worked as a teacher on the Film and TV Directing Department of ADU. Today he works there as a Professor of Documentary Directing. He is the founder of the TV Program Department and graduate studies of documentary film. He taught and mentored projects of young professionals in Europe, Asia, South America, Near East, Africa and USA. In 1997 he founded Factum, the most important Croatian independent documentary production. He has been managing it ever since. He has produced more than 70 documentary films that were shown on more than seventy festivals. In addition to numerous international awards, they won three Grand Prix Awards and four Best Production Awards at the Days of Croatian Film. In 2005, he founded ZagrebDox, the biggest international documentary film festival in the region. He has been its director ever since.

He received the City of Zagreb Award and the Order of Danica Hrvatska. He is also a winner of the Albert Kapović Award for outstanding contribution to the art of film in Croatia (awarded annually by the Croatian Producers Association) and Gold Medal for best producer at Belgrade Documentary and Short Film Festival.

For his work on documentary film, particularly for launching and managing ZagrebDox, he received in 2009 the European Documentary Network (EDN) Award and Medal of the City of Zagreb.

He is a member of the European Film Academy.