Every Hyacinth the Garden Wears: The Archaeology of Medieval Hungarian Queenship (1000-1395) 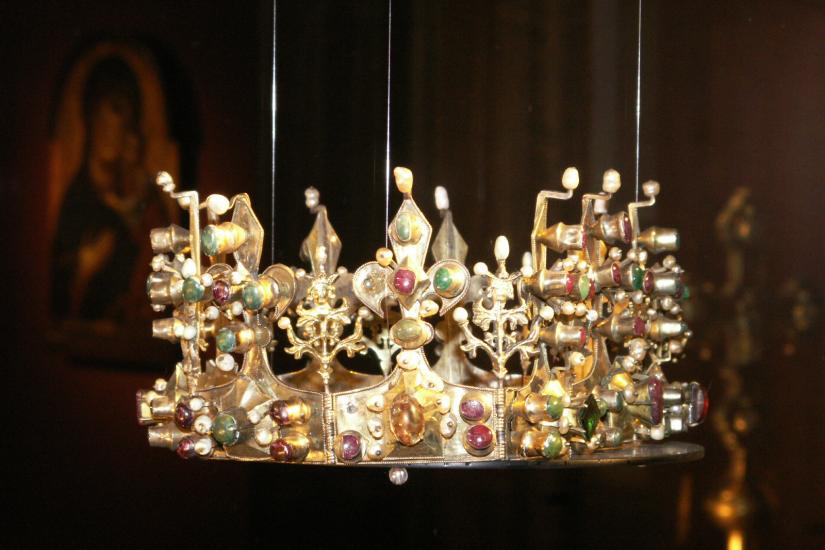 In this dissertation I aim to understand how medieval queens in the Hungarian kingdom used material culture and structured space as expressions of their own power in public as well as private spheres. Data from objects, images and spaces connected to thirty individuals over the course of four centuries will be analyzed in terms of the queen’s own agency and capacity for action. This concern for the individual experience is a tricky one as reconstructing individual lives through material culture is extremely difficult and in some cases impossible. It has also been the case that the charter evidence of the queens is, relatively speaking, very sparse and analysis has centered only on the written records. While greatly informative, the fact that over the centuries many of Hungary’s medieval archives have undergone wave after wave of destruction, this means that any conclusions reached from the paltry surviving records must not be taken as the final word on the power and agency of the medieval Hungarian queens. It should be mentioned that although much of the material culture of the medieval kingdom of Hungary has undergone significant destruction as well, there have been a few fortunate survivals. The attempt made here has been to understand the 134 objects, 29 images and 17 spaces that survive in some format in the context of their relationship to the queen. These are divided into five categories of analysis: official and public objects, items worn on the body, personal and religious objects, images, and finally spaces used by the queens both in life and in death. It goes without saying that in spite of these categories, they are merely guidelines for separation rather than rigid categories totally separated from one another. The main questions asked of this material will be: How is power related to the office of queenship manifested in the preserved material and archaeological record? To what extent are artifacts remnants of the queen’s personal (i.e. as mother, wife, daughter) or her official duties? How can the queen’s presence be detected in at archaeological sites associated with her? The ultimate goal of this dissertation will thus be to provide a different, more nuanced view of the narrative that medieval queens in Hungary were passive and dependent figures; that they understood and used the media of objects, images, and spaces to display their own power to public and private audiences.

The result of this research has uncovered a few interesting facts related to how the activities of queens changed throughout time. In the eleventh century, most of the activities related to the queen survive solely in relation to their involvement in the church. Gisela of Bavaria (d. 1065), aside from founding Veszprém Cathedral, was heavily involved in the creation and donation of liturgical objects and books before retiring to a monastic life. Her activities are echoed in her successors, such as Anastasia of Kiev (d. 1096?) and her influence in the decision for the king to purchase the Patak forest, Judith of Swabia’s (d. 1094?) donation of liturgical books to Kraków Cathedral upon her remarriage, and Adelaide of Rheinfelden (d. 1090) donating a reliquary cross with a similar story to one commissioned by Queen Gisela. What follows afterwards is about a century of relative inactivity during a period where there are two very strong queens acting as unofficial regent: Helen of Serbia (d. 1146?) and Euphrosyne of Kiev (d. 1193?), whose only known activities independent of their behind-the-scenes administration consist of monastic foundations.

Towards the end of the twelfth centuries, there emerges a resurgence in activity related to material culture and space on the part of the queens. Agnes of Antioch (d. 1184) not only was found with an impressive set of grave goods (including a crown and a ring) from her preserved tomb, but she was also involved in the construction of a public bath at Esztergom. Margaret of France (d. 1197) used material culture (including a lavish tent) as part of not only a gift-giving strategy to Crusaders passing through, but also as part of negotiations with them. Constance of Aragon (d. 1222), while only in Hungary for a short time, may be the possible influence behind the Hungarian coat-of-arms; her collection of grave goods is very impressive, though they tell more about her time as Queen of Sicily, rather than her time as Queen of Hungary.

The wives of Andrew II (r. 1205-1235) built off the more official role of the queen by their immediate predecessors. While Gertrude of Meran (d. 1213) might have been holding the king’s seal at the time of her untimely murder, it was Yolanda of Courtenay (d. 1233) who is the first Hungarian queen who employs her own seal and who first appears on coinage. After the Mongol Invasion, Maria Laskarina (d. 1270) continues this tradition of using her own seal in charters she issues, as well as by being heavily involved in several construction projects, such as the Dominican nunnery of Margaret Island as well as the Citadel of Visegrád. Elizabeth the Cuman, as the widowed queen regent, appears on coinage issued by her son, but her first seal as rival princess declaring her “daughter of the Emperor of the Cumans” is bold in its imagery. Within Hungary, the last Árpádian queens seem to follow earlier behaviors, though Elizabeth the Cuman and Isabella of Naples (d. 1303) are in the habit of journeying outside the royal centers.

In essence, the fourteenth century is where the interaction between queens, material culture, and power seems to reach its apex. Agnes of Habsburg (d. 1364), widow of Andrew III (r. 1290-1301) spends the last sixty years of her life promoting her family’s self-image at her monastery at Königsfelden which left a great deal of artifacts related to heraldry, stained-glass windows, books and textiles. Elizabeth of Poland (d. 1380), wife of Charles I Robert (r. 1308-1342), was not only an incredibly rich woman, but also one who left a great deal of activity in the material record. Elizabeth gave a great many gifts to the church (reliquaries, crosses, nativity figurines, books, etc.), not only those which survive to present, but also those which were mentioned in her will. She was also very heavily involved in several construction projects; not only in regards to activities at the royal palaces of Óbuda and Diósgyőr, but also in the building, renovation, and reconstruction of nearly twenty-six monasteries and parish churches. She was also a very active gift-giver, particularly on her sojourns to the Italian peninsula as well as on her pilgrimage through Prague, Marburg and Aachen.

Her daughter-in-law, Elizabeth of Bosnia (d. 1387), presents an interesting counterpoint to the power of the queen. Married in 1353, there is no known surviving charter of this younger queen until 1370, around the time that she begins to have surviving children. At this time, her activities begin to emerge, two of which are of utmost importance: her book of instruction for her daughters, which she wrote shortly after their birth, and her donation of the silver reliquary sarcophagus to the shrine of St. Simeon in Zadar. It is also worth comparing the places of activities of these two queens. While Elizabeth of Poland is heavily involved in construction projects and donations at the royal centers of Hungary (i.e. Buda, Óbuda, Diósgyőr, etc.), Elizabeth of Bosnia mostly is involved on sites related to the fringes of the kingdom, such as Zadar or Sárospatak (the site of a Poor Clares convent she most probably founded).

This survey ends with Mary of Anjou (r. 1382-1395), the queen regnant. Her very exceptional case shows a real blending of power associated with both the ruling king as well as a king consort. Her reign is usually divided into two periods: her mother’s regency (1382-1386) and her marriage with Sigismund of Luxemburg (1387-1395). The material culture is influenced by this change, particularly in the seals she uses during which part of her reign. Nonetheless, while it is true that after her marriage the number of charters she issues decreases, there are still plenty of symbols of her power during the period of co-rule with her husband. In the first case, the Queen still issues coinage in her own name from the period of her marriage. Her foundations are typical for a young queen consort, though there are also exceptional cases such as a bell with her name on it from a hospital in Gyöngyös, possibly a foundation of her own. Her interest in literature is proven not only by her ownership of a Hungarian-language psalter, but also by commissioning Lorenzo de Monacis to write a chronicle in verse on the first few years of her reign. Regardless of the queen’s de facto or de jure power, the material culture shows that Mary clearly understood the importance of promoting her own image and exercising her own power. Rather than a victim or neglected wife, she emerges as a clever, capable woman in her own right.

Understanding the nature of the queen’s power is more complicated, but when interpreted as the capacity for action, there is a great body of evidence indicating that the queens were responsible for a great many actions in the period under consideration, from small donations to the church to the erection of massive buildings. Joint activities with the king (such as a donation or a burial together) suggest that the overtly expressed power of the queen may be hidden or more of a form of ‘soft power’. In many ways, there is a move away from studying queens as independent, finite units when recent views indicate that studying the concept of “rulership” is more fruitful. In the medieval mindset, the king and queen functioned as a complementary pair, with the queen taking on more feminine roles such as intercession. In moments where the queen is seen as superceding her power, disaster occurs, such as the murder of Gertrude of Andechs-Meran and Elizabeth of Bosnia. The queen’s power was also subject to the king and for Euphemia of Kiev and Isabella of Naples, the king’s disinterest could entail divorce or imprisonment. For most of the queens in this study, part of the reason their presence has been so nebulous is that they understood the roles expected of them and acted accordingly. One cannot speak about the action of the queens without considering the actions of the kings and the many joint actions between the royal couple (donations to churches, monastic foundations, etc.) are testament to the queen being tied to the king, both by her “office” as well as by her person. When viewed in this light, the picture that emerges is not of four centuries of weak, penniless queens with two or three exceptions, but rather a long-term process which fluctuates from queens in the eleventh century making a strong personal mark on Hungarian rulership to the growth of it as a more “official” aspect of the court which is more dependent on the king.

In some ways, research related to the medieval queens of Hungary will always be an ongoing task. In asking new questions about the actions and potential for action in the material culture and spaces of the Hungarian queens, a clearer picture emerges of exactly going beyond the words of the chroniclers and the few surviving charters can impart a totally different story about how the queens were able to promote their own self-image, transfer culture among their family, and alter space to their will.