JS Lecture Series - Yoav Galai - Narratives of redemption: The Zionist imaginary and afforestation in the Negev 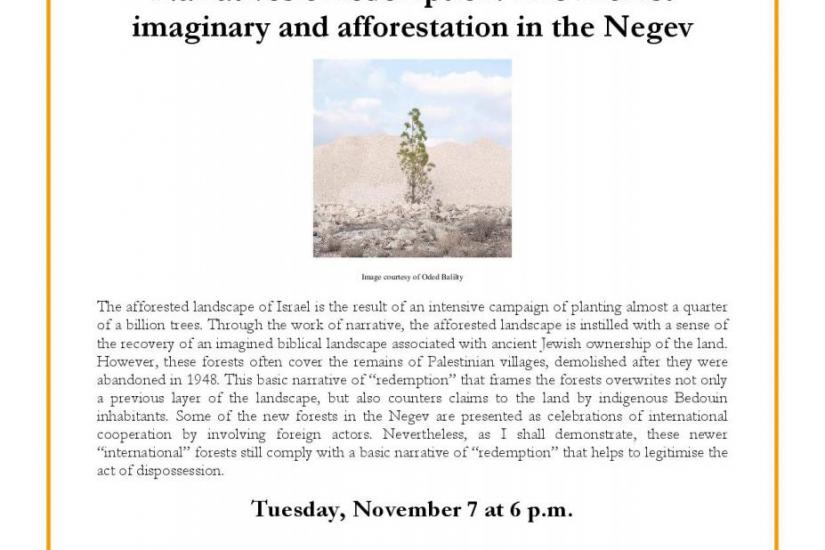 cordially invite you to a lecture by

Narratives of redemption: The Zionist imaginary and afforestation in the Negev

The afforested landscape of Israel is the result of an intensive campaign of planting almost a quarter of a billion trees. Through the work of narrative, the afforested landscape is instilled with a sense of the recovery of an imagined biblical landscape associated with ancient Jewish ownership of the land. However, these forests often cover the remains of Palestinian villages, demolished after they were abandoned in 1948. This basic narrative of "redemption" that frames the forests overwrites not only a previous layer of the landscape, but also counters claims to the land by indigenous Bedouin inhabitants. Some of the new forests in the Negev are presented as celebrations of international cooperation by involving foreign actors. Nevertheless, as I shall demonstrate, these newer "international" forests still comply with a basic narrative of "redemption" that helps to legitimise the act of dispossession.

Yoav Galai is a former photojournalist and NGO project manager who did his PhD at the University of St Andrews. He specialises in narrative politics, collective memory and Israel-Palestine. As a postdoctoral fellow at the CEU, Yoav is exploring visual culture and political practices of landscaping in Israel and Europe.