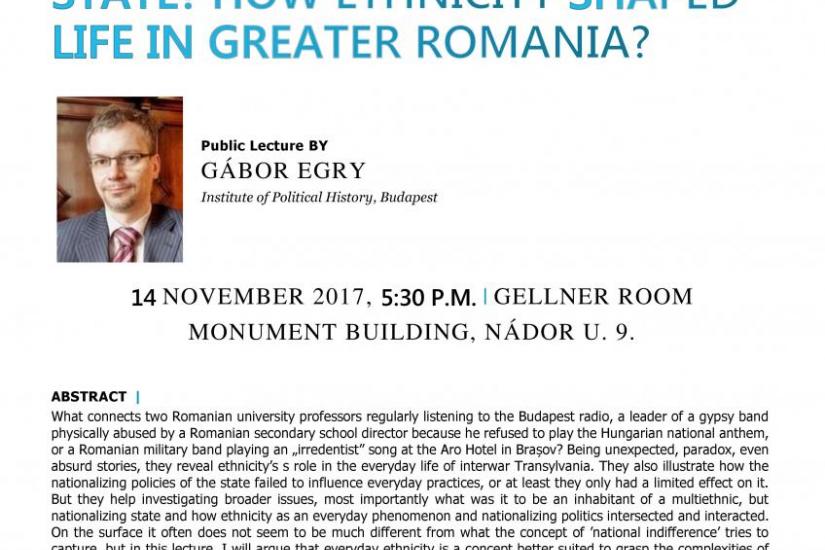 INSIGNIFICANT MOMENTS WITHIN A NATIONALIZING STATE? HOW ETHNICITY SHAPED LIFE IN GREATER ROMANIA?

What connects two Romanian university professors regularly listening to the Budapest radio, a leader of a gypsy band physically abused by a Romanian secondary school director because he refused to play the Hungarian national anthem, or a Romanian military band playing an „irredentist" song at the Aro Hotel in Brașov? Being unexpected, paradox, even absurd stories, they reveal ethnicity's s role in the everyday life of interwar Transylvania. They also illustrate how the nationalizing policies of the state failed to influence everyday practices, or at least they only had a limited effect on it. But they help investigating broader issues, most importantly what was it to be an inhabitant of a multiethnic, but nationalizing state and how ethnicity as an everyday phenomenon and nationalizing politics intersected and interacted. On the surface it often does not seem to be much different from what the concept of 'national indifference' tries to capture, but in this lecture, I will argue that everyday ethnicity is a concept better suited to grasp the complexities of how ethnicity shaped different spheres of life. It does not make 'national indifference', however, dispensable or obsolete as there is a possibility to integrate it into the theoretical framework as one variety of everyday ethnicity.