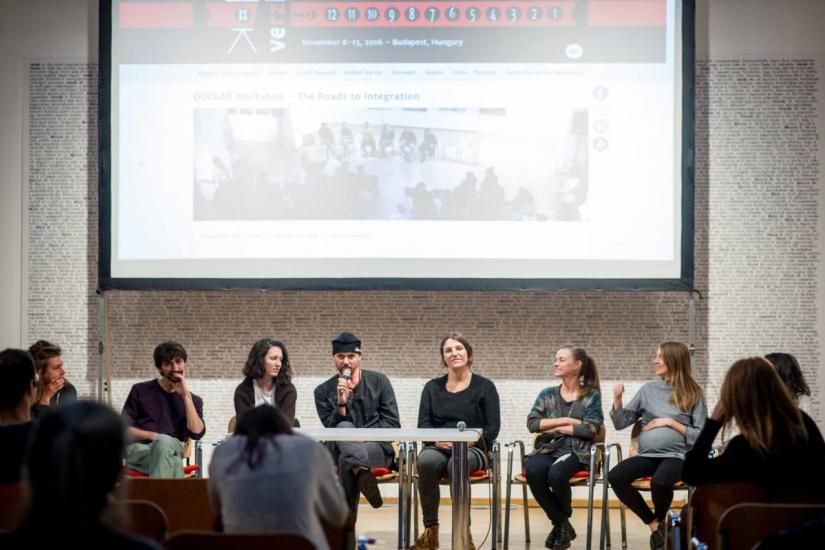 The Visual Studies Platform and the Verzio International Human Rights Documentary Film Festival cordially invite you to the screening of the films created in the course of this year's Verzio Doclab.

For the second time since opening in 2016, CEU Library’s Mirabaud Media Lab is hosting the Verzio DocLab workshop. The workshop brings together a team of filmmakers, editors, and human rights experts with beginning and advanced filmmakers for an intense 5-day program on structuring, editing, and post-producing films. The resulting works will be shown at a public screening and Q&A on Wednesday, November 15 at 6pm at the Vera and Donald Blinken Open Society Archives as part of the Verzio International Human Rights Documentary Film Festival.

Participants of the 7 selected projects will work on a short doc, trailer, or scene during the workshop. The projects all have a strong thematic connection to human rights. The screening will give you a glimpse into the newest documentaries in production, and the audience can also gain insight into the creative process.

Participants of the 2017 Verzio Doclab and the themes their documentaries explore:

“Ali”  by Reka Dubinyak and Krisztina Meggyes (Hungary)
Is it a feasible expectation to become Ferenc Szabó when once you were Ali, the Yezidi refugee? The film shows sacrifices and struggles that has to be faced when someone has to leave his previous life; one has to turn away from the former habits and has to learn how to adjust to completely different living circumstances. What inner conflicts does one have during integrating to a foreign country?

"My Mom, Her Summerhouse And Other Stuff" by Valentina Gordeeva (UK/Russia)
“My mom, her summerhouse and other stuff” is a short documentary about the filmmaker's mother - Lubov, her summerhouse and everything what happens around her in provincial Russian town where she lives. She made her way from a factory worker to the management and now she is facing a retirement, as the new factory managers want to get rid of the aged staff. In preparation for the retirement and pension misery as an inevitable result, Lubov bought an old summerhouse with a garden attached to it, where she's planning to grow her own vegetables. This film is not only an intimate portrait of an aging Russian woman but also about provincial Russia, which is still a mystery not only for the International audience but for the Russian as well.

“It's Her Story” by Sara Haragonics, Asia Der and Sara Laszlo (Hungary)
In a country where legal adoption is not an option for gay couples, two women still decide to start a family. “It's Her Story” gives a deep insight into the prejudices pervading our daily life through struggles of a lesbian couple who is adopting a Roma child in an exclusive, conservative society.

"We Can Never Fall On Our Knees" by Judit Ignacz and Nora Palandjian (Hungary/US)
“We Can Never Fall On Our Knees” relays the stories of three Roma Holocaust survivors, highlighting how they resonate with present-day experiences of intolerance as well as the survivors’ efforts of resistance. Among only a handful of remaining Roma Holocaust survivors, characters Raymond, Lona, and Peter each share different experiences that are connected by a common mission to advocate for equality and fight against contemporary anti-gypsyism and hate in a time of increasing intolerance.

“All I Wish To Tell” by Guliz Saglam and Uskan Nagehan (Turkey)
Ani Balikci (62), an Armenian woman from Istanbul, struggles for justice after she lost her son Sevag, to a bullet fired by another soldier, in 2011, while in military service. The film focuses on Ani's confrontation of her past and her change during her struggle for justice. Facing the realities puts Ani in a dilemma of leaving or staying in Turkey where her roots belong.

“Endless Shadow” by Gergo Somogyvari and Judit Feszt (Hungary)
“Endless Shadow” pieces together some of the world’s most iconic walls and border barriers – made of stone, brick and dirt, or of barbed wire, concrete panels, metal sheets. The film will present each one from a personal point of view through intimate human stories placed under the long shadows of this barriers. The presence of the walls and the stories of the people coexisting with them are linked together in the film and thus a broader, timeless human story. In this film, walls and theirs shadows do not only separate, but also merge destinies.

“Queer Tango Goes to Russia” by Aleksandr Vinogradov(Brussels/Russia)
The most outstanding international queer tango representatives are going to a queer tango festival in St.Petersburg, but the harsh reality of contemporary Russia may pose some real challenges to them. Is there a place for such an event in Russian society?

See more at the Facebook page of the event.