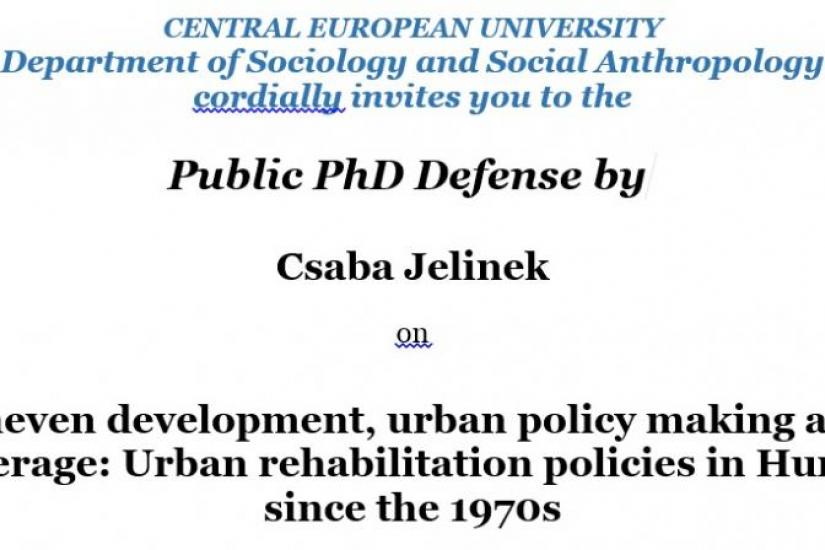 Since the 1970s, “urban rehabilitation” has been the main territorially focused policy through which the Hungarian state has tried to intervene into urban spaces that are negatively affected by uneven development. Though “urban rehabilitation” as a concept has been used extensively in the last five decades, both the practices and representations attached to it have changed significantly according to the actual ideological, institutional and structural contexts of the different historical periods. Through interviews, archival materials, document analyses, macro-statistical data collection and ethnographic observations, I track these changes in order to show how the relation of the Hungarian state to urban decline has been reworked by politicians, scholars, bureaucrats and various expert groups on different scales. I identify four historical junctures that I analyze in detail as periods of intensified changes in urban policy: the unfolding global crisis in the 1970s and 1980s in Hungarian state socialism; the radical institutional and geopolitical changes around 1989; Hungary's EU accession in 2004 after more than a decade of liberal hegemony; and the landslide political and economic changes around 2008-2010 when, amidst the global economic crisis, the right-wing regime took an authoritarian turn.

In the late 1970s and early 1980s – within the broader trend of a global economic crisis which took the form of a debt crisis in semi-peripheral Hungary – the concept of “urban rehabilitation” was introduced in opposition to the previous modernist urban planning ideas, i.e. “urban reconstruction” and green field socialist prefab constructions. Thus the introduction of urban rehabilitation as a concept in the late 1970s can be studied parallel to other crisis-driven institutional and ideological changes, and in tandem with the emerging field of experts working with the concept. In the 1990s – as a part of the policy package of the transition from socialism to capitalism – urban rehabilitation was seen as a tool to adapt to “capitalist” processes and to attract private capital in an entrepreneurial manner. In this period the field of experts became adapted to the new “liberal” institutional architecture. From the mid-2000s, and particularly after EU accession in 2004, urban rehabilitation became a wide-spread urban policy tool due to the significant amount of EU funds dedicated to “integrated urban interventions”, which led to the emergence of “social urban rehabilitation”. In the field of experts it brought professionalization and the inflow of a new generation. Since the authoritarian turn in 2010 urban rehabilitation has gradually begun to focus on governing marginalized territories with social tensions in a paternalist way– as an element of the post-crisis polarizing politics of the right-wing regime. By 2014 it brought changes in the expert field as well, with the appearance of a new, ambiguous relation to politics.

Through following the history of urban rehabilitation as a policy, this dissertation shows how different actors in different periods tried to problematize and change urban processes in different Hungarian cities. More broadly, through this historical journey I show how state representations and practices have been rescaled in the last five decades in Hungary, and how the work of governing cities has been changed in tandem with the restructuring of the institutional architecture of policy making. I argue that instead of a simplified “socialist city” – “capitalist/post-socialist city” dichotomy, a more nuanced analysis is needed in order to understand the role of urban policies. Moreover, instead of seeing urban policy making as a merely “urban” or “national” issue, I demonstrate the significance of the interplay between global historical ruptures and local (dis)continuities in the practices of urban policy making animated by different acts of brokerage.

For this reason throughout the thesis I pay specific attention to the ever-changing functions of creating and dissolving institutions. I show that these acts of (de/re)-making institutions are practices of brokerage that mediate between different domains of politics, markets and society, for example between “global” and “local” processes, between the “state” and the “people”, or between political cosmologies and state practices.