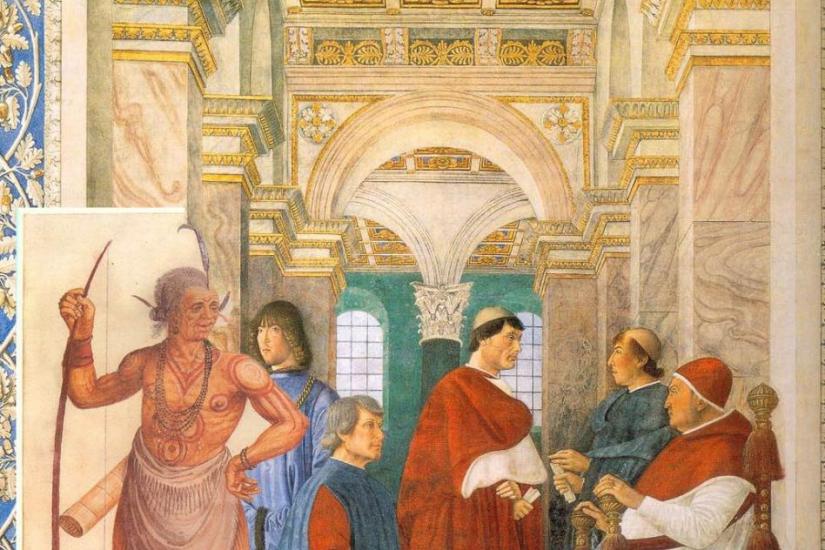 It is a commonplace about the Renaissance that it opened up new horizons for the Medieval Europeans in more than one directions: looking backward, the people of the Renaissance rediscovered the cultural and intellectual heritage of the classical Antiquity; looking upward they discovered the true structure of the skies, the place of the Sun and the planets; looking forward they found new geographical horizons and discovered new lands and new races; and even looking around themselves they opened their eyes to new features of nature: the lower strata of the Great Chain of Being, from the minerals through plants to the animal kingdom including their own bodies. All this contributed to the revolutionary forging of the natural sciences. These discoveries resulted in the reconfiguration of science and even the arts: perspectivic representation meant a new way to show three-dimensionality on two-dimensional surfaces from map making to high Renaissance painting.

There was a special intellectual group in the hub of all these changes: the humanists. Some of them were primarily  scientists, others educators, or artists, but common in them was that their enthusiasm toward the classical heritage often connected with an interest in the new, the unknown, the futuristic.

The first part of the talk will reflect on the long debate concerning the definition of humanism and the humanists. The second part shall revisit a few case studies in which we can observe the combination of philology, historical interest and the proposition of new ideas - often inspired by a widening horizon resulting from travel. The examples will also relate to our region, East-central Europe in one way or the other. 1/ Callimachus Experiens from Roman neo-pagan academy to Polish humanism and politics; 2/ Conrad Celtis on the move in Central Europe; 3/ Copernicus from Hermeticism to a new cosmology; 4/ Giordano Bruno from Egyptian magic to the infinite universe; 5/ Richard Hakluyt creating geography and ethnography based on the ancients as well as observation; 6/ István Parmenius of Buda from theology to a poet of panegyric on navigation and the New World.

GYÖRGY E. SZÖNYI is professor of English (Szeged) and cultural/intellectual history (CEU, Budapest). His interests include cultural theory, the Renaissance, the Western Esoteric traditions, and conventions of symbolization – early modern and (post)modern. Some monographs: Pictura & Scriptura. 20th-Century Theories of Cultural Representations (in Hungarian, Szeged, 2004); Gli angeli di John Dee (Roma: Tre Editori, 2004); John Dee's Occultism (Albany: SUNY Press, 2004, paperback 2010). In the making: The Enoch Readers. A Cultural History of Angels, Magic, and Ascension on High; The Mediality of Culture and the Emblematic Way of Seeing.He has edited among others: European Iconography East & West (Leiden, 1996); The Iconography of Power (with Rowland Wymer, Szeged, 2000); The Iconology of Law and Order (with Attila Kiss and Anna Kérchy, 2012); Centers and Peripheries in European Renaissance Culture. Essays by East-Central European Mellon Fellows (with Csaba Maczelka).  He is on the editorial board of Aries and Aries Monograph Series (E. J. Brill) and several other national and international journals. He held several scholarships: Fulbright (USA, 1986/87, 10 months; 2004, 5 months); Mellon (Germany, 1995, 3 months; USA 2001, 3 months; Germany, 2012, 2 months); he was a Senior Fellow at the Collegium Budapest Institute for Advanced Study (1998/9, 10 months); during 2009 he served as Leverhulme Visiting Professor at the Department of English, Communication, Media and Film of Anglia Ruskin University, Cambridge (12 months).