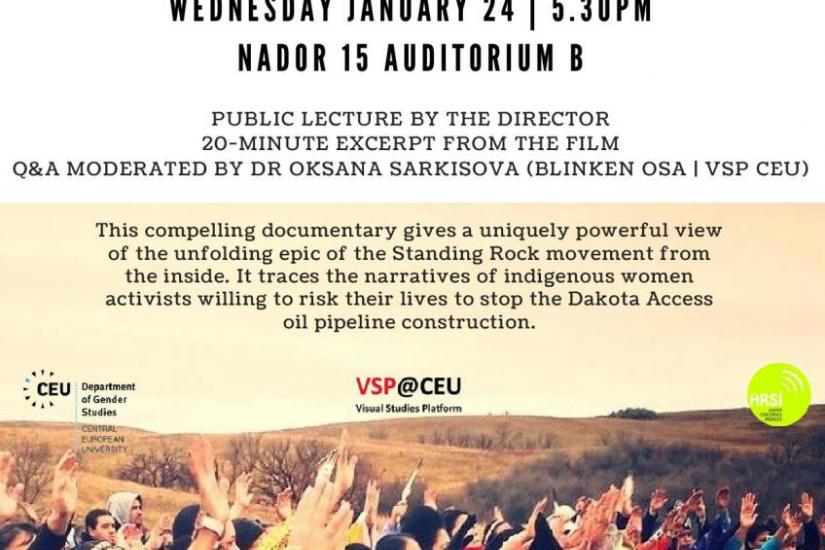 The Department of Gender Studies

with public lecture by Emmy-winning filmmaker

END OF THE LINE: THE WOMEN OF STANDING ROCK is the incredible story of a group of indigenous women willing to risk their lives to stop the Dakota Access oil pipeline construction that desecrated their ancient burial and prayer sites and threatens their land, water, and very existence. In the process, they must face the personal costs of leadership, even as their own lives and identities are forever transformed in the crucible of one of the great political and cultural events of the early 21st century. This compelling documentary gives a uniquely powerful view of the unfolding epic of the Standing Rock movement from the inside, illuminated through the harrowing experiences of the remarkable women at the heart of it all.

Featuring exclusive footage of tribal elders and on-site action, END OF THE LINE is both an exploration of the rise of indigenous and feminine power in the areas of social and environmental justice, and a searing and deeply personal story of the struggle for survival in the face of genocidal colonization.

Shannon Kring is a United Nations World Tourism Organization Liaison and serves as Honduras’ Goodwill Ambassador. She works with the United Nations, US Department of State, USAID, United Nations Environment Programme, and many other global bodies on issues concerning the indigenous and other marginalized members of society, environmental sustainability, and cultural preservation. In this multimedia presentation, Kring will share excerpts from her forthcoming documentary, and share her observations about how despite more than 500 years of human rights violations, the spirit of the American Indian woman has not been broken.

Shannon Kring’s work as a documentary filmmaker and television producer has been presented by dozens of governments, and by leading institutions including the United Nations Permanent Forum on Indigenous Issues, the Smithsonian Institution Museum of the American Indian, NASA, MIT, the British Museum, UNESCO, the National Museum of Finland, and many others. She has been featured on television and radio the world over, and in more than 300 print publications including THE WALL STREET JOURNAL, TIME, BON APPÉTIT, and VARIETY. She keynotes internationally, and is the award-winning author of five nonfiction books.

This event will conclude with an audience Q&A.