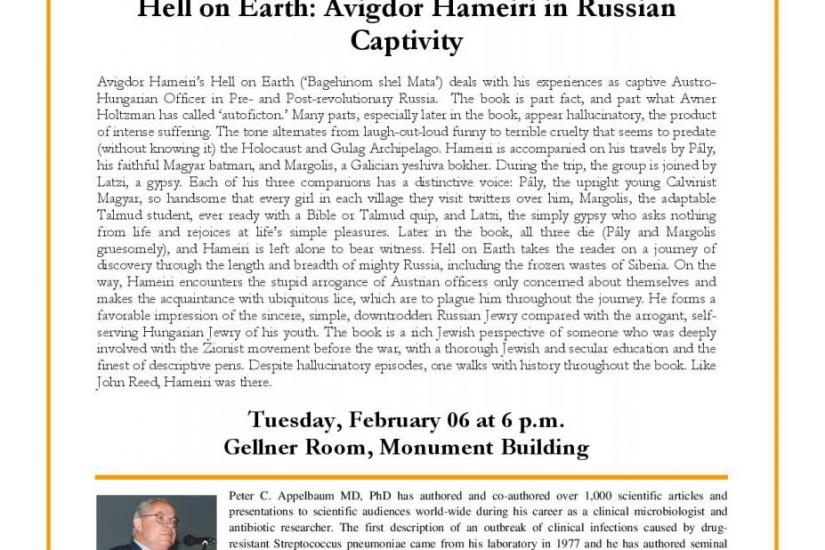 Avigdor Hameiri's Hell on Earth ('Bagehinom shel Mata') deals with his experiences as captive Austro-Hungarian Officer in Pre- and Post-revolutionary Russia. The book is part fact, and part what Avner Holtzman has called 'autoficton.' Many parts, especially later in the book, appear hallucinatory, the product of intense suffering. The tone alternates from laugh-out-loud funny to terrible cruelty that seems to predate (without knowing it) the Holocaust and Gulag Archipelago. Hameiri is accompanied on his travels by Pály, his faithful Magyar batman, and Margolis, a Galician yeshiva bokher. During the trip, the group is joined by Latzi, a gypsy. Each of his three companions has a distinctive voice: Pály, the upright young Calvinist Magyar, so handsome that every girl in each village they visit twitters over him, Margolis, the adaptable Talmud student, ever ready with a Bible or Talmud quip, and Latzi, the simply gypsy who asks nothing from life and rejoices at life's simple pleasures. Later in the book, all three die (Pály and Margolis gruesomely), and Hameiri is left alone to bear witness. Hell on Earth takes the reader on a journey of discovery through the length and breadth of mighty Russia, including the frozen wastes of Siberia. On the way, Hameiri encounters the stupid arrogance of Austrian officers only concerned about themselves and makes the acquaintance with ubiquitous lice, which are to plague him throughout the journey. He forms a favorable impression of the sincere, simple, downtrodden Russian Jewry compared with the arrogant, self-serving Hungarian Jewry of his youth. The book is a rich Jewish perspective of someone who was deeply involved with the Zionist movement before the war, with a thorough Jewish and secular education and the finest of descriptive pens. Despite hallucinatory episodes, one walks with history throughout the book. Like John Reed, Hameiri was there.

Peter C. Appelbaum MD, PhD has authored and co-authored over 1,000 scientific articles and presentations to scientific audiences world-wide during his career as a clinical microbiologist and antibiotic researcher. The first description of an outbreak of clinical infections caused by drug-resistant Streptococcus pneumoniae came from his laboratory in 1977 and he has authored seminal work on many other aspects of bacterial drug-resistance, including vancomycin non-susceptible Staphylococcus aureus. During retirement, his interests in German and other languages as well as modern Jewish history has yielded six books: 'Loyalty Betrayed: Jewish Chaplains in the German Army During the First World War' ; 'Loyal Sons: Jewish Soldiers in the German Army in the Great War'; Prayer after the Slaughter' (a bilingual translation of Kurt Tucholsky's war poetry and essays); 'Broken Carousel' (a bilingual compilation of First World War German-Jewish war poetry); 'Hell On Earth' (the first translation of Avigdor Hameiri's 'Bagehinom shel Mata'); 'Jewish Tales of the Great War' (a translation of war stories by Selig Schachnowitz and Felix Theilhaber).Website: http://www.peterappelbaum.com