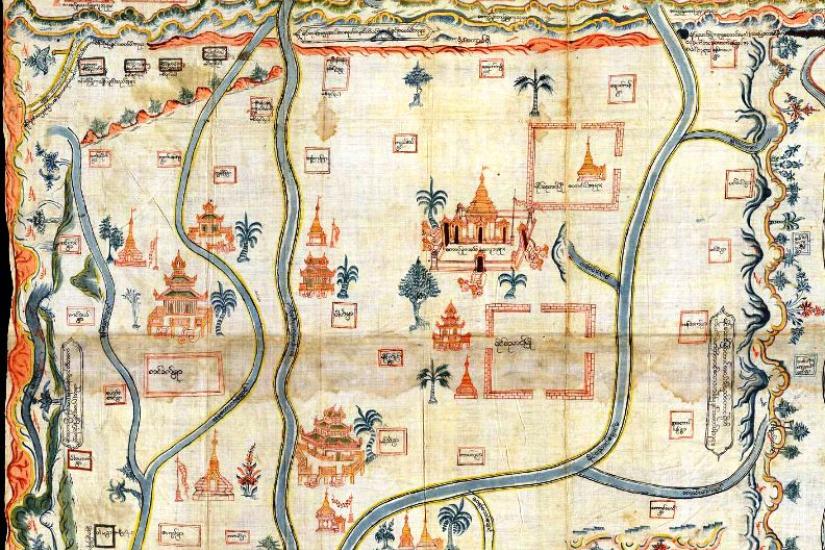 Like all ancient civilizations, royal Myanmar had its own cartographic traditions and mapping methods. Myanmar map-makers in the days of the monarchy used simple techniques and materials. Maps were used for various purposes including city planning, property recording, administration, taxation, boundary demarcation, architectural work, defence, or planning military actions. Thus far, special emphasis was placed on parabaik-maps and cloth maps from the eighteenth and nineteenth centuries.  At the same time, various types of pre-modern maps existed, e.g. rock-maps, wall-paintings, palmleaf manuscripts, parabaik-maps, cloth maps and printed paper maps and Myanmar is among the few countries in Southeast Asia where many of these survived and can be the subject of interdisciplinary study. However, few studies have focused on ancient historic maps, because they are not easily accessible, and foreign scholars are often unaware of their existence. To study them collectively and individually, attempts have been made to collect and preserve all available maps as Myanmar’s invaluable cultural heritage.

The most important research questions are when these maps were first produced and how they evolved. Who were the mapmakers and how did they learn cartography? How can we classify pre-modern Myanmar maps in terms of sources and content? Were the maps produced using traditional techniques and materials? What are the historical, cultural and artistic values of these maps? What are the most common patterns in map making and how can they be studied by interdisciplinary methods? How were the maps used and what kind of knowledge transfer took place before, during, and after the creation of these maps?

Dr. Tin Naing Win is professor at the Department of History, University of Mandalay, Myanmar. He is a CEU-HESP Research Excellence Fellow in 2017-2018 and is affiliated with the Department of Medieval Studies, CEU. His research interests include cultural history, Buddhist culture, research methodology and sources, art history and cartographic history. He participated in projects at  Seoul National University (Korea), University of Cambridge and Wolfson College (UK), the Northern Illinois University and Bard College (USA), Central European University (Hungary), as well as at institutions in Myanmar.