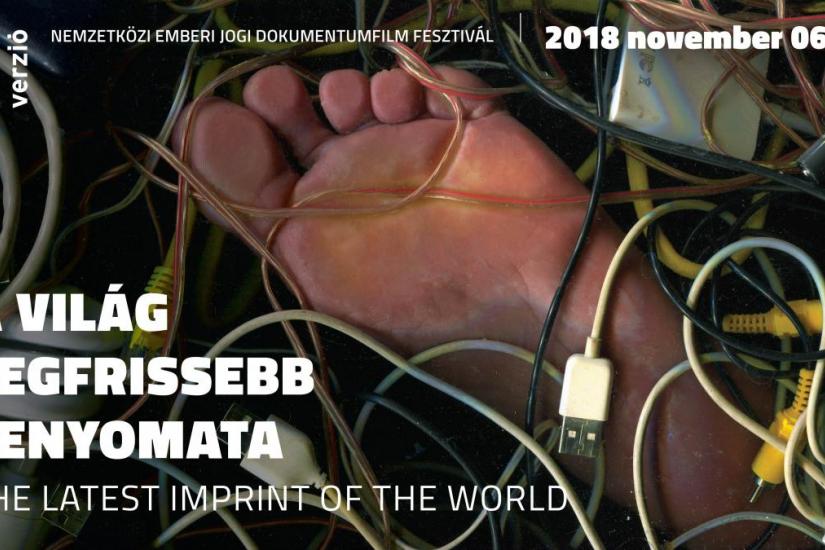 This year brings the 15th Verzió International Human Rights Documentary Film Festival. 59 films from 35 countries will be shown in Budapest, November 6–11. The slogan of this year’s festival is the Latest Imprint of the World.

The primary aim of documentary filming is to record the events of the world, to reveal hidden phenomena, and to show human stories: to create a visual imprint of what is going on around us. But what imprint are we leaving for the coming generations? The 15th Verzió Film Festival is once again bringing you the most exciting selection of documentaries from recent years to show you the latest imprint of the world.

Along with the Human Rights Competition, the Student/Debut Competition, and the Hungarian Panorama, this year’s festival has its focus on three main topics: the world of employment (Labour: Our Life), the relativity of the way we remember (Shapes of Memory), and the state of our planet (Our World: Breaching Limits). In the Hommage section, we remember two extraordinary documentary filmmakers, Claude Lanzmann and Michael Glawogger, by putting their last films on screen. Wapikoni Mobile is a collection of shorts made by young, indigenous people in Canada, during a workshop.

Our highlighted partner this year, the International Labour Organization (ILO), deals with employment issues, workers’ rights, and the present and future of the world of labour. The films in the Labour: Our Life section are presented with the support of the ILO, and are focus on current issues in the world of work. Within this section you can find films on modern-day slavery in our own neighborhoods, on a mobile phone manufacturing plant in China that spreads deadly disease, and inside footage of the worst paying jobs in the Czech Republic. You can learn about the absurd world of Swedish job centers, watch  migrant workers in Qatar build a World Cup stadium while playing their own championship, and see if a Swedish manager can save the largest car factory in Russia.

The events of our lives leave an imprint on us. Though it might be important to recall the  dark memories of our past to overcome trauma, these memories are often misleading or distorted. In this section, Shapes of Memory, you can follow the biography of Kurt Waldheim, an Austrian politician who, while forgetting his Nazi past, became the Secretary General of the United Nations. You can relive the 1968 occupation of Czechoslovakia through the memories of the occupying soldiers, watch as a Croatian theater director invokes memories of a child’s murder in 1991 as a form of therapy, or try to understand why an emblematic figure of the Belgrade resistance lives next to a door that has been locked for more than 70 years. Historical remembrance can also become a business. A bizarre example of this comes from Laos, the most heavily bombed country in the world, where bomb tourism is flourishes nowadays. Alternatively, see how director Bill Morrison creates an ode to the era of silent films and the Yukon gold rush with archive pieces that were hidden underground for decades. (Bill Morrison will also give a masterclass during the festival).

How fast are we cutting the branch we sit upon? How much time do we have left before global warming raises sea levels and the tide washes everything away? What can we do now to slow down this process? Our Earth: Breaking Limits is a section that reports on the status of our planet—from the gigantic trees of a French forest, through the lives of oil miners, to the everyday realities of amber hunters in war-torn Burma. One director leaves behind a letter to his grandchild about climate change and the steps to avoid it, which might not be too late. We can also learn where our used phones and computers go: the greatest waste dump in the world, Akra—or as some people call it, Sodom.

Once again this year we bring you the professional program, where well-known experts will discuss the Hungarian documentary scene. Topics will include: recent festival successes, financing opportunities at home and abroad, and new ways to distribute films. (November 7–9 , CEU, October Hall)

Documentary Films from the workshops of Verzió and CEU. Enthusiastic beginner and experienced filmmakers can work on shorts and trailers with the support of an international team of professionals. The films will be discussed by the filmmakers and workshop leaders during the festival. (November 9, Blinken OSA)

The charity café of the International Red Cross will host the Guests meet Guests meetings, where professional questions will be discussed. Entry for passholders only. (November 7–9 , Empathy Café)

This year Verzió is introducing another program for the younger generations: Youth Verzió , where partner NGOs offer a full-day program on human rights for teenagers. The Student Verzió  offers free, pre-organized screenings and discussions for secondary school students on weekday mornings.

A compilation of Verzió films will also be shown outside of Budapest, on November 15–25 at the Apolló Cinema in Pécs, the Grand Café Cinema and Megálló in Szeged, and for the first time, in Kecskemét at the Otthon Cinema.

The 15th Verzió Film Festival is supported by the Creative Europe Media program of the European Union.