The Venezuelan Crisis - A Panel Discussion 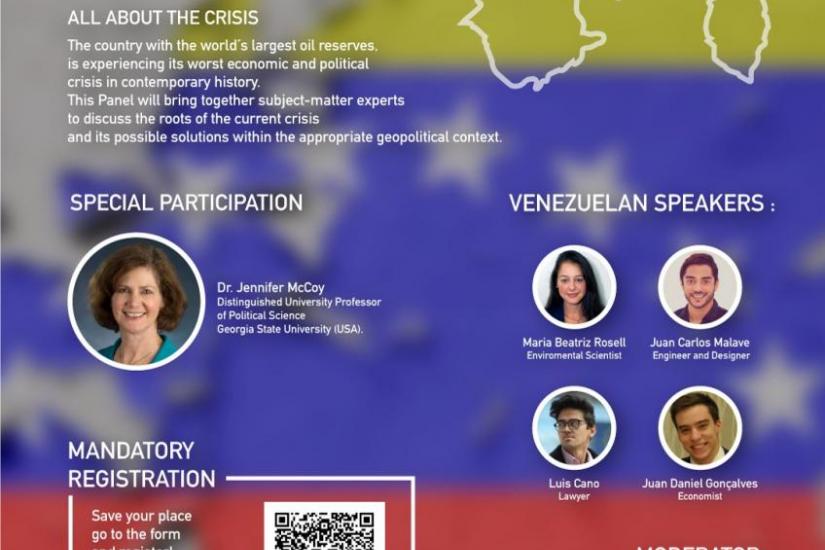 Venezuela, the country with the world´s largest oil reserves, is experiencing its worst economic and political crisis in contemporary history. Once the richest and the most stable democracy in Latin America, Venezuela is now experiencing an unprecedented economic and political crisis. Ever since January 2019, more than 50 countries around the world, including most Western democracies, have come forward to support interim president Juan Guaidó as the legitimate maximum representative of the executive branch in Venezuela. Other countries such as Russia, China, Turkey, Iran, and Cuba continue to recognize and support president Nicolás Maduro. This Panel will bring together subject-matter experts to discuss the roots of the current crisis as well as possible solutions within the geopolitical context.

Dr. McCoy us a is Distinguished University Professor of Political Science at Georgia State University (USA). She served as Inaugural Director of the Global Studies Institute at GSU (2015-16). She is currently a Core Fellow, at the Institute for Advance Study at CEU.

She was the Director of the Carter Center’s Americas Program (1998-2015), leading projects on democratic strengthening, mediation and dialogue, and hemispheric cooperation. At The Carter Center, Dr. McCoy created the group of Friends of the Inter- American Democratic Charter group; directed The Carter Center’s projects on Mediation and Monitoring in Venezuela 2002-2004, Ecuador-Colombia Dialogue Group 2008-2010, and U.S.-Andean Dialogue Group 2010-2011; led over a dozen election monitoring missions and organized former President Carter’s historic trips to Cuba in 2002 and 2011. She served as a mediator in Venezuela, and between Ecuador and Colombia. A specialist on democratization and polarization, mediation and conflict prevention, election processes and election observation, and Latin American politics, Dr. McCoy has authored or edited six books and dozens of articles. Her latest book is International Mediation in Venezuela (with Francisco Diez, 2011).

Maria Beatriz Rosell Pérez was born and raised in Barquisimeto (Venezuela). She is an active member of the Venezuelan Community in Hungary since 2012. She also took leadership positions in the student protests and the national student movement in Venezuela during period 2007-2009. She moved to

Between 2014 and 2017, Maria organized protest events which led to the formation of a group of Venezuelan activists in Hungary. She co-founded and has been coordinator of Viva Venezuela - Hungría (VV-H) civic movement, founded in 2017. This initiative was created to exclusively address the topic of human rights violation in Venezuela and raise awareness of this issue in Hungary.

She currently works at an environmental consultancy as a project manager. Maria is also a founding member and part of the board of directors of the civic Association Venezolanos en Hungría (English: Venezuelans in Hungary).). She holds an MSc. In Environmental Science and Management from CEU and Lund University, a BSc. in Environmental Studies and a Diploma in Higher Education Teaching.

Juan Carlos was born and raised in Puerto Ordaz, Venezuela. He majored in Chemical Engineering from the Universidad Metropolitana in Caracas, Venezuela and is currently pursuing a Master of Arts in Graphics Design (Budapest Metropolitan University, Hungary).

He was also a member of the student movement which emerged after 2007 in Venezuela. He was the Coordinator of the Social-Civic committee at the Student Union of Universidad Metropolitana between 2009 and 2010. He was Briefly imprisoned in 2010 by the Venezuelan political police.

Juan has been living in Budapest since 2016 and working for the Venezuelan Community in Hungary. He is also a Cofounder and Coordinator of the civic movement Viva Venezuela - Hungría and a founding member of the civic Association Venezolanos en Hungría.

Juan Daniel was born and raised in Caracas, Venezuela and majored in International Political Economics with an additional Certificate in Latin American Studies from Georgetown University in Washington, DC. Juan Daniel made the study of Venezuela’s political economics a central part of his academic career, publishing the following two theses:

Juan Daniel often writes analytical and opinion pieces about the Venezuelan situation across various publications in different countries, such as for Global Risk Insights. Juan Daniel is also involved as a member of the Viva Venezuela - Hungría movement and is a member of the World Economic Forum's Global Shapers program, committed to supporting and developing local and regional civic engagement.

Luis was born and raised in Caracas, Venezuela, and is a constitutional lawyer working in corporate policy and human rights. Luis has been working in governance and organizational development for the last 5 years, with a focus on the public sector. Initially a lawyer in policy and public law by training, he transitioned to coaching when training legal practitioners in public speaking since 2009. His expertise includes constitutional and human rights consulting, with a focus on Venezuela, the EU, and Hungary.

His recent experiences include working in capacity-building for civil society in Western Africa with Global Witness; business development for LEAD Academy in Berlin, Germany; and consulting in Labour strategy and corporate leadership education for Diebold Nixdorf International. Furthermore, over the last two years, Luis has been a crucial element in developing the Momentum Academy and the Jövőképző initiative to train in leadership skills, performance skills and critical thinking of party members and party sympathizers.

He holds a bachelor’s degree in law from the Catholic University of Caracas and two master’s degrees in Constitutional Law (LL.M) and Public Policy (MPA) from the Central European University in Budapest.

Antonio was born and raised in Caracas, Venezuela, and he is a current PhD Candidate in Political Science on the Political Economy Track at CEU. His research interests focus on the political economy of petroleum-rich states. His latest paper analyses the effects of petroleum revenues on political constraints on the executive, especially in on-democratic regimes. He has also made research on labour-market effects of political discrimination in Venezuela after the recall referendum of 2004, when the administration of Hugo Chávez publicly released the details of the voters who signed the petition for such referendum.