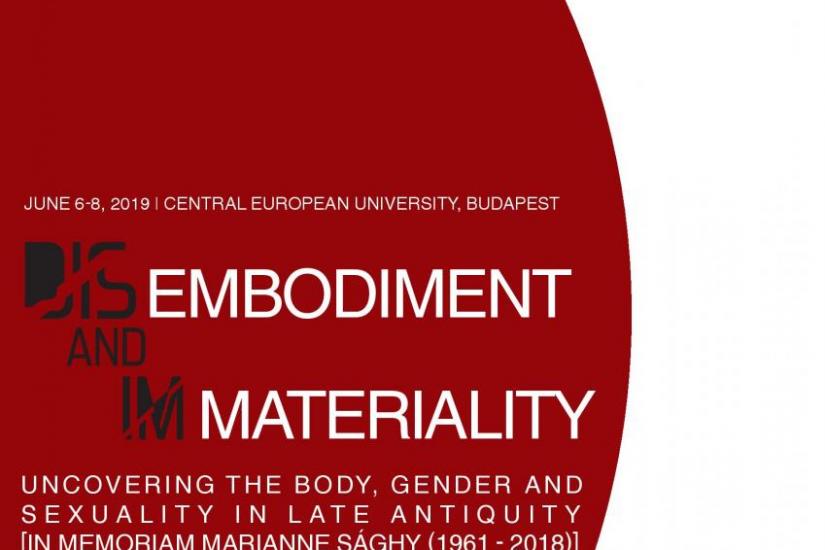 Please find attached the programme below.

In his book From Shame to Sin: The Christian Transformation of Sexual Morality in Late Antiquity, Kyle Harper emphasizes that Christianity had made an enormous difference in how late ancient men and women conceptualized their passions and sexual activities. Also, feminist critics of ancient philosophical theories have focused on theories of matter. Fascinated by Aristotle’s identification of matter with privation, ugliness and femininity, they often tend to consider mainstream philosophies as sexist and the positive evaluation of matter and body as the gauge of the liberation of the female gender. Moreover, there is a tendency to link the Christian dichotomy of spirit and flesh to these philosophical theories. On the other hand, Late Antique scholars, following the lead of Peter Brown, have pointed to the function of sexual renunciation in early Christianity in liberating women from their traditional roles played in the Roman society. Yet, rarely if ever do scholars who are engaged in gender and sexuality studies attempt to conduct a comprehensive and in-depth study into these interrelated phenomena, while mainstream scholarship on these often turns a blind eye to the gendered perspective.

The impact of the philosophical theories of matter upon the dogmatic debates between Christians and non-Christians, as well as between the diverse Christian theological trends, are largely unexplored and even less clear are the practical spiritual and social consequences of the adoption of one or another theory. The twentieth century has seen a vast array of studies in theories of matter from metaphysical and cosmological perspectives. The dogmatic history of pre-Christian philosophies and metaphysics is now largely written. However, these bodies of literature have rarely intersected with methodologies from feminist theory and philosophy. In turn, feminist scholars often neglect important moments and aspects of the history of Christianity, to radicalize a positive evaluation of embodiment or a negative one of disembodiment. Also, an outstanding task remains to extend these investigations to the world beyond the Mediterranean and to involve into them parallel phenomena in other philosophies and renunciatory traditions, Jainism, Buddhism and in the new Hinduism born in the Middle Ages from a reaction against these reformatory trends.

This conference aims at contributing to an eventual closure of the gap between the aforementioned fields. It will focus on the continuity and change in the social perception and role of the body, gender and sexuality in Late Antiquity, on intersections of gender studies, history of sexuality, feminist philosophy, philosophies of late antiquity, patristic and Gnostic studies, the history of asceticism, the history of Indian philosophy. It aims to bring together scholars of Late Antiquity and the early Middle Ages to explore how novel theories on late antique Greco-Roman and Indian philosophy, early Christianity, Gnosticism, Buddhism and Jainism connect to gender and sexuality studies. The profiles targeted are both graduate students and early- to mid-career researchers.

This conference thus has the ambition to attract specialists in the above fields and also to generate discussions on the relevance of feminist methodologies and their adequacy to the existing interpretative literature, and vice versa. We are inviting papers trying to give answers to the questions above.

This conference is co-organized by Department of Medieval Studies and Department of Gender Studies at Central European University, Budapest, in partnership with Hungarian Patristic Society, and is funded by CEU’s Conferences and Academic Events Fund and Center for Mediterranean Studies.