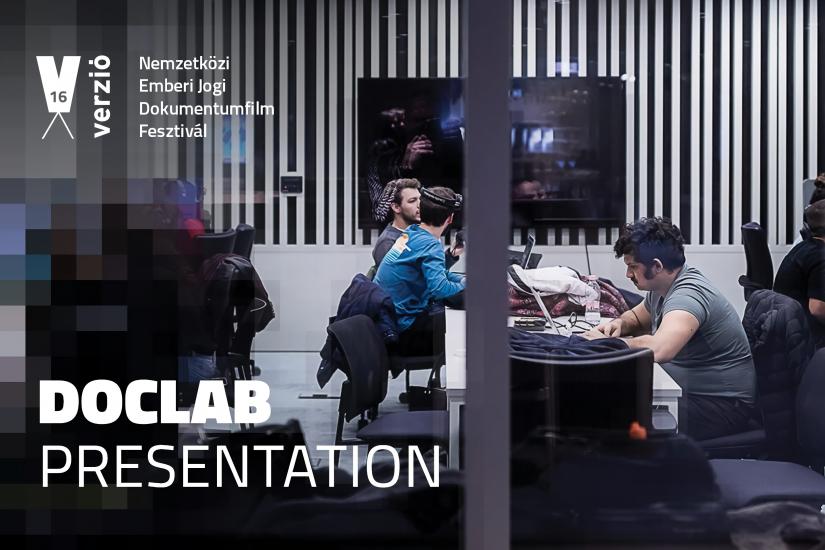 The 5th edition of Doc Lab, co-organized by Verzió and the CEU Visual Studies Platform, will mentor 9 projects in the frame of an intensive filmmaking workshop at CEU Mirabaud Lab from November 11th till 14th. Participants will receive guidance and mentorship in creating a trailer, a short film or documentary essay or in editing a scene or episode from a feature-length project in development. The Doc Lab films will be presented by the participants and the international team of tutors (Zsuzsanna Gellér-Varga, Moniek Wester Keegstra, Jeremy Braverman, Levente Pap) on November 15th at 16.30 at the Blinken OSA Archive.

Doc Lab films are subtitled and presented in English.

Zsuzsanna Gellér-Varga, D.L.A. is a documentary filmmaker and video-storyteller. Her thesis film (UC Berkeley Graduate School of Journalism), Screw Your Courage won awards at US film festivals and was broadcast on public TV. She worked for the New York Times Television as a video-journalist and later directed documentaries (Once They Were Neighbours, 2005, Synagogue For Sale, 2007, Mr. Mom, 2009, and Angel Business, 2018), which were screened internationally and broadcast on public TV. She taught documentary ethics at the international masters program, DocNomads at the University of Theatre and Film Arts, Budapest.

Moniek Wester Keegstra is an independent documentary filmmaker and trainer in dramaturgie and interview. She directed documentaries for Dutch television. Gaza, Gabbers and Graffity was nominated for the Prix d’Europe and had worldwide screenings at film festivals. She worked with NGOs Doctors Without Borders, Oxfam Novib and Amnesty International. Moniek was involved as filmmaker and creator of the TV-series and online platform 26000 Faces. In showing film portraits about asylum seekers in the Netherlands it created impact on Dutch politics and was selected for IDFA. She is co-creator of the longitudinal online ‘Lifeboat Project’ about HIV and stigma. The essence of her work is to get to the core of human experience.

Levente Pap is a freelance film editor. He has been working for several award winning fiction films and documentaries since 2000. His latest short fiction Cubeman won more than 30 awards all around the world. He is also a promo producer for HBO Hungary, and an editing consultant and post supervisor for DocNomads Joint Masters in University of Theatre and Film Arts, Budapest.

Jeremy Braverman is Media and Visual Education Specialist at Central European University. He teaches courses in documentary filmmaking in various departments at CEU, and oversees the Library’s Mirabaud Media Lab. As a filmmaker, his short films have played in festivals across the US, and he is currently collaborating on documentary films with faculty from CEU and ELTE. Prior to joining CEU, Jeremy spent 15 years teaching filmmaking in the US, and worked in the independent film industries in Chicago and Pittsburgh. He earned his MFA in Film & Video from Columbia College Chicago, and prior to that worked as a freelance translator and television personality in Budapest in the mid-90’s.

JUST FOR FUN - Nadin Helmi (Egypt), Natalia Kovyliaeva (Russia) and Endre Kuklin (Hungary)
Just for Fun takes a critical look at the tradition of “chasing of women” during the Busójárás festival in Mohács, Hungary. Intrigued by the history of the festival and its significance for the community, three filmmakers observed the festival with an eye on the gender dynamics of the masked men’s (Busós’) interactions with the crowd.

DAUGHTERS OF HOPE - Ratsheko Nthite (South Africa)
This is a story about perseverance, patience and hope. Project Hope Africa has made some young women’s entrepreneurial dreams come true by donating 120 chickens, chicken cages and food for them to start a business. Happy is one of the business women who also helps translate in the village of Vingerkraal.

UNLIMITED ROG OF EXPIRATION - Jasmina Mustafić (Slovenia)
The Autonomous Factory Rog, squatted since 2006, is a very diverse and often chaotic autonomous space in the center of Ljubljana. It is a thorn in the side of the corrupt mayor, who wants to turn the former bicycle factory into a more lucrative venue. The city is gentrifying fast, but the Rog community is standing their ground.

HATCHERY - Máté Fuchs and Krisztina Meggyes (Hungary)
Finding a job where feeling successful is possible, living independently from parents, and being accepted by society—these are the everyday dreams of an extraordinary young woman. Mariann lives with autism, and, while trying to build an insect farm, has to face many difficulties that would rightfully challenge anyone.

NOT A MATURE POLITICIAN - Flóra Bognár (Hungary)
Blanka Nagy, an 18-year-old student, gave a speech at an anti-government demonstration in 2018, after which she became famous, or rather notorious. The film follows the arc of her life after the media’s attempts at character assassination: her darkest moments and the path leading to her candidacy in municipal elections.

MY MOTHER’S DREAM - Boglárka Bicsák (Hungary)
Lilkó is a sensitive teenager born with Down syndrome. She has loved gymnastics since pre-school. In 2015, she took part in the Los Angeles Special Olympics World Games. As a gymnast, she has won two gold, two silver and one bronze medal. But in 2019, just before the Special Olympic World Games, she had to face the fact that no matter how good she is, she can’t go on to the next challenge.

KIX - Dávid Mikulán, Kiss Viki Réka (Hungary)
KIX is the story of a troubled street boy. The film follows him from age eight to eighteen, when he reaches the verge of adulthood. Over that decade, he transforms from a young mischief-maker into a public enemy.

EXPLORERS - Leah Hendrick (Hungary)
Anita, born blind, lives with her husband and their two-year-old daughter. One day her husband discovers a special treatment that could help her see colors and shapes. Will she be better able to fulfil her role as a mother after the treatment?