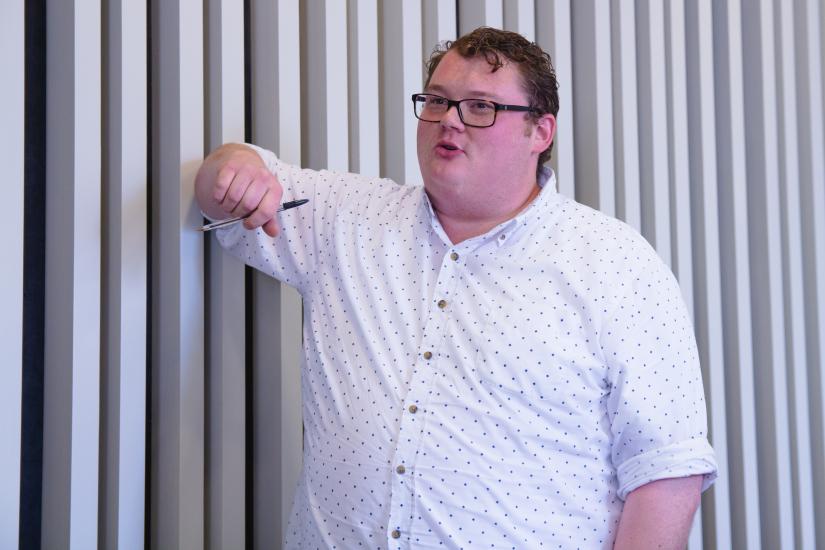 The Department of Philosophy cordially invites you to the Public Defense of the Ph.D. Dissertation
by
Garrett Mindt
on
Reducing Uncertainty
Understanding the Information-Theoretic Origins of Consciousness

Ever since the hard problem of consciousness (Chalmers, 1996, 1995) first entered the scene in the debate over consciousness many have taken it to show the limitations of a scientific or naturalist explanation of consciousness. The hard problem is the problem of explaining why there is any experience associated with certain physical processes, that is, why there is anything it is like associated with such physical processes? The character of one’s experience doesn’t seem to be entailed by physical processes and so an explanation which can overcome such a worry must (1) explain how physical processes give rise to experience (explain the entailment), (2) give an explanation which doesn’t rely on such physical processes, or (3) show why the hard problem is misguided in some sense.
Recently, a rather ambitious and novel theory of consciousness has entered the scene – Integrated Information Theory (IIT) of Consciousness (Oizumi et al., 2014; Tononi, 2008; Tononi et al., 2016) – and proposes that consciousness is the result of a specific type of information processing, what those developing the theory call integrated information. The central aim of this dissertation is to philosophically investigate IIT and see whether it has the ability to overcome the hard problem and related worries. I then aim to use this philosophical investigation to answer a set of related questions which guide this dissertation, which are the following: Is it possible to give an information-theoretic explanation of consciousness? What would the nature of such an explanation be and would it result in a novel metaphysics of consciousness?
In this dissertation, I begin in chapter one by first setting up the hard problem and related arguments against the backdrop of IIT (Mindt, 2017). I show that given a certain understanding of structural and dynamical properties IIT fails to overcome the hard problem of consciousness. I go on in chapter two to argue that a deflationary account of causation is the best view for IIT to overcome the causal exclusion problem (Baxendale and Mindt, 2018). In chapter three, I explain IIT’s account of how the qualitative character of our experience arises (qualia) and what view of intentionality (the directedness of our mental states) IIT advocates. I then move on in chapter four to show why the hard problem mischaracterizes structural and dynamical properties and misses important nuances that may shed light on giving a naturalized explanation of consciousness. In the last and fifth chapter, I outline a sketch of a novel metaphysics of consciousness that takes the conjunction of Neutral Monism and Information-Theoretic Structural Realism to give what I call Information-Theoretic Neutral-Structuralism.