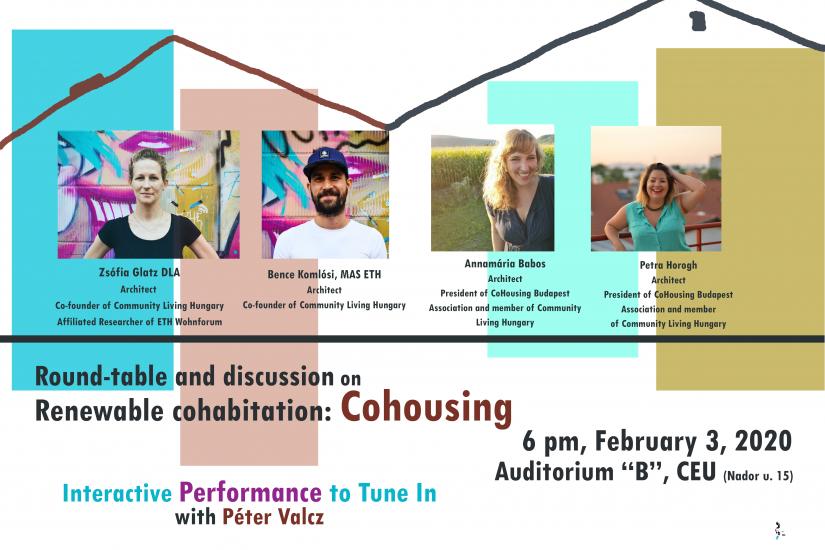 For an affordable, sustainable and environmentally conscious living,
along with the strength of community

The discussion will be preceded by an interactive performance to tune in for the topic by Péter Valcz.

Cohousing or collaborative housing is a way of housing where inhabitants engage voluntarily and consciously in living together and they create and develop together their dwelling with the strength of community alliance.
“Inhabitants of cohousing make up a community, they nurture neighbor relationships, even beyond the borders their residence, developing even whole cities with their activities.

They are experimenting: by building ecologically and practicing an economic model based on sharing, they spare money and energy. Cohousing initiatives bring together generations, they offer an inclusive environment and a new way of life. They put great emphasis on a collaborative and self-maintained, socially sensitive architecture. Their inhabitants believe that the journey leading to community housing is also important, such as community planning and management and everyday common activities, too. Spaces planned specifically and coordinated activities enhance communication inside community and interaction with neighbors.”

The “Community Living Hungary” (Közösségben Élni) initiative started in 2012 with the aim of getting familiar thoroughly with the ways of bottom-up collaborative housing spread in Western Europe and popularize them in Hungary. In these countries bottom-up collaborative house construction is an important third actor beside state and profit-oriented property development. “Community Living Hungary” is searching for the answer on how to start bottom-up nonprofit cohousing initiatives and housing associations that are based on common goals with active participation of the members, since the foundation until its long term maintenance.

The two founding members of “Community Living Hungary”, Zsófia Glatz and Bence Komlósi will present the development of community dwellings, their Hungarian experience and possible directions.

Zsófia Glatz DLA
Architect, she earned her DLA in 2017 at the Doctoral School of Architecture, BME. After winning the Eötvös Research Grant she spent a semester in Switzerland in the GTA Institute of ETH and in the ETH MAS Housing – Wohnforum. In the same year, she was awarded with a Junior Prima prize. Between 2007 and 2015 she participated as researcher and guest lecturer in the educational program of Department of Residential Building at TU Budapest/ BME. Between 2013 and 2015, she coordinated the „Departmental research” course. She is the co-founder of „Community Living Hungary” since 2012 and co-founder of Architecture for Refugees since 2015. Since 2017 she is affiliated researcher of ETH Wohnforum.

Bence Komlósi, MAS ETH
Architect, he earned his MAS Housing title at the ETH MAS Housing – Wohnforum. Between 2007 and 2015 he participated as researcher and guest lecturer in the educational program of Department of Residential Building at TU Budapest / BME. Between 2013 and 2015, he coordinated the „Departmental research” course. Since 2012 he is the co-founder of „Community Living Hungary” and co-founder of Architecture for Refugees since 2015.
Currently, he completed his doctoral studies at the MOME DLA school.

Annamária Babos and Petra Horogh are co-founders and active members of CoHousing Budapest Association. They present current, on-going experimental projects of collective living in Hungary. The presentation will discuss the D54 and SissiCrib coliving places, the Bíró Foundation House, the RK Cooperative House, the proactive work of the CollAction Budapest group and the plans for the E-Co-Housing (Több mint lakóház) affordable housing project.

The CoHousing Budapest Association was established in 2019 with the collaboration of fifteen founding members, a number of whom had engaged in the topic of co-living in the informal group Community Living Hungary since 2012.

The team of CoHousing Budapest envisions a world in which communities support each other actively and inclusively take charge of the establishment of above-adequate housing arrangements in the largest cities of Hungary. Their mission is to promote community living and to support already existing community arrangements. In the meantime we are dedicating significant effort into designing and then gradually improving the Hungarian cohousing model.

Annamária Babos
Architect and researcher. She is a member of Community Living Hungary and a founding member of CoHousing Budapest Association. She graduated as an architect on TU Budapest (BME), Department of Residential Building Design in 2016. Currently, she is the student of the BME Csonka Pál Doctoral School, at the Department of Urban Planning and Design. Her research topic is about contemporary urban housing forms and liveable cities. She is responsible for the cohousing section at the Department's Urban Housing Lab. As a teacher, she participates in the training of architects and urban studies at the BME. She deals with collective living forms theoretically and also practices it by living.

Petra Horogh
Graduated in architecture, but she is currently working as a project manager to support municipalities with their directly EU founded innovative urban development projects.
Since 2012 she is part of the Community Living Hungary (Közösségben Élni) initiative, and since 2019 one of the co-founders and presidents of the CoHousing Budapest Association. After several years of researching, she decided to try to live in a community in real life. Together with 5 other people, they started a co-living project, and she was living there for 4 years. At the end of 2018 they have started to work on the first Hungarian co-housing project named: CollAction Budapest.

Entrance to the event is free.