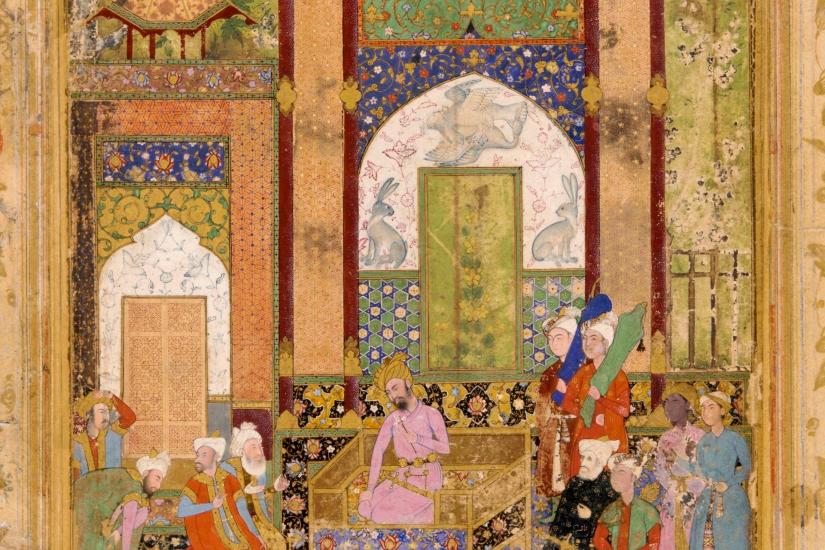 The Safavid period throws up two central issues with respect to the relationship between mysticism, sovereignty, and power. The first arises from the problem of a militant Sufi order seizing power in an empire based on the millennial and charismatic sovereignty of the leader, embracing the hierocratic order of the normative Shiʿi religious establishment, and ending up supressing not just rival Sufi orders but the very idioms of Sufi practice and beliefs within the court and the society within a few generations. Specialists continue to debate the reasons for this and point to the anomalies of ‘episodes’ like Nuqṭavī millenarianism at the turn of the 11th/17th century. The second is the increasing construction of an intellectualised, court mysticism (ʿirfān) at the expense of a more popular Sufism of the teahouses, the khānqāhs, and the shrines, the former characterised by the metaphysics of Ibn ʿArabī (d. 1240)  mixed with philosophy and Shiʿi theology and exemplified in the figures of Mullā Ṣadrā (d. 1636) and his student Muḥsin Fayḍ Kāshānī (d. 1680), and the latter with social antinomianism, music, dancing, and millennial disruption. The authority and the sovereignty of the Shāh derived from his mystical nature and yet since there could only be one source and pivot for that mystical unfolding of the divine, all others needed to be suppressed.

Drawing on the earlier work of specialists like Babayan, Anzali, Jaʿfariyan and others, I will examine two types of texts and questions. The first is the construction of the image of ʿAbbās II as a ‘Sufi-loving’ sovereign, the mystical body in the polity – what did this mean and why did the literary sources feel the need to identify him as such? The second is texts that addressed themselves to the Shāh and sought a particular kind of relationship with Sufis, whether affirming or negating it – and these will include the Tuḥfa-yi ʿAbbāsī, the Rawżat al-anvār-i ʿAbbāsī, anti-Sufi polemics written by Mīr Lawḥī (d. 1676) and Ṭāhir Qummī (d. 1687), and the writings of the Kubravī and related Sufis in the 17th century. Was the shariʿa-minded reaction of theologians in the middle of the 17th century a significant turn in political theology and the space for the mystical, or was the period of ʿAbbās II the last gasp attempt of the mystical to be effectively deployed in politics in the face of a new religious establishment whose desire for social and religious order was greater than their tolerance for the enchantment of their society?

Sajjad Rizvi is Associate Professor of Islamic Intellectual History and the Director of the Centre for the Study of Islam at the University of Exeter. Having written extensively on the history of philosophy, theology, and mysticism in the Safavid period, he is currently working on a number of studies on the post-Safavid period and putting together a monograph on philosophical traditions in Safavid Iran.