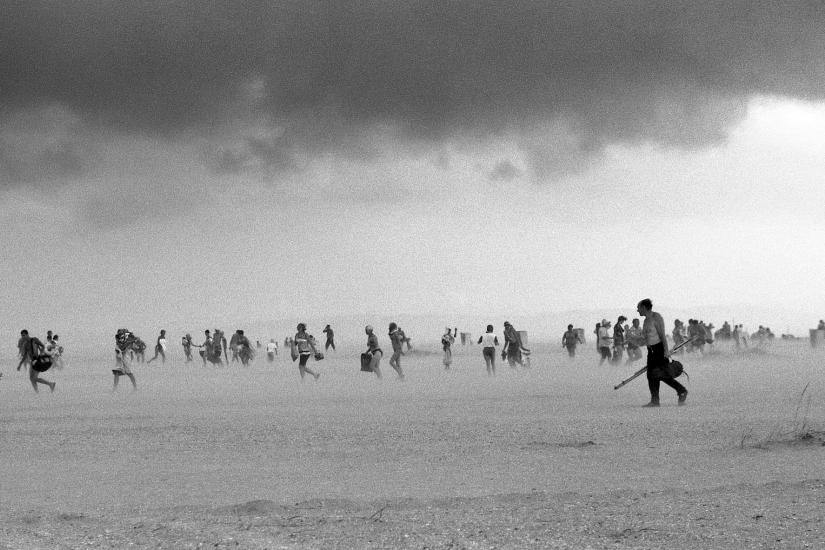 For more than a decade, photographer Lenke Szilágyi (who has also been working as a photo-archivist in the Archives for a number of years) has regularly traveled to the (former) Soviet Union, witnessing and documenting the fall of Communism and Post-Soviet realities not only in large centers like Moscow or St. Petersburg but also in the provinces (the Black Sea coast, the Volga region, Karelia, etc.). Her photos are sensitive imprints of an era of constant change and territory of eternal immutability. She depicts in her portraits the hopes and despairs of the time, while also adding her own witty commentaries in the diary entries accompanying the photos. This exhibition is the first major presentation of this collection.

Lenke Szilágyi started her career as a documentarian of the Budapest underground in the 1980s: her unique portraits of legendary literary figures, artists, actors, filmmakers, musicians, and members of the democratic opposition and her sensitive photos of the everyday life of this scene made her one of the most important photographers of the period. In the mid-1980s, she began her travels all over the world; it was in 1990 that she first travelled to Moscow, on an assignment for the samizdat journal Beszélő to cover the Helsinki Conference. But she also documented a city that was at the time still the capital of the Soviet Union, which collapsed a year later.

A year later, she spent four months in the crumbling country in the company of a Hungarian Bulgakov-scholar and his friends. They stayed in Sukhumi on the Black Sea coast, also travelling to conferences in St. Petersburg, Samara or Kyiv. She spent the last month of this sojourn on a voyage down the Volga and on the Black Sea. The photos she took during her voyage, again, focus more on the people and their immediate surroundings than on the sea or the majestic river with its colorful autumn landscapes.

In 1993, the Georgian-Abkhazian war prevented Szilágyi and her friends from returning to Sukhumi, so they spent one month on the Russian coast of the Black Sea, in Gelendzhik, from where they travelled to the Crimea (then part of Ukraine), to St. Petersburg, and to Lake Ladoga in Karelia. Her lyrical reports (and the diary she kept during this journey) reflect her deep understanding of country life and of the local people, whether in sunny Crimea or in cold, northern Karelia. This sensitivity emerges clearly in her portraits of smoking youngsters or resting old women, too.

Szilágyi returned in 1996 to war-torn Sukhumi (under adventurous circumstances: using a fake passport), finding burnt-down houses, and hardly any of her former friends in the once charming city. In the following years, she regularly traveled to Russia: she took a trip to Lake Baykal and Irkutsk in 2001 and spent a couple of weeks on the beach at Blagoveshchenskaya on the Black Sea in 2002. Wherever she went, she took photos that, to quote art critic András Bán, are “unique, and do not tolerate captions or comments… they are meaningful in themselves as if floating... ” Their compositional wit and sometimes their sheer strangeness capture the spontaneity of street scenes

Her scenes capture the peculiarities of the post-soviet era with a great sense of composition, light, and environment, showing a remarkable ability to communicate both humor and tragedy. The exhibition brings together photographs in both black and white and color, many of which were processed and developed by the artist herself at the time.