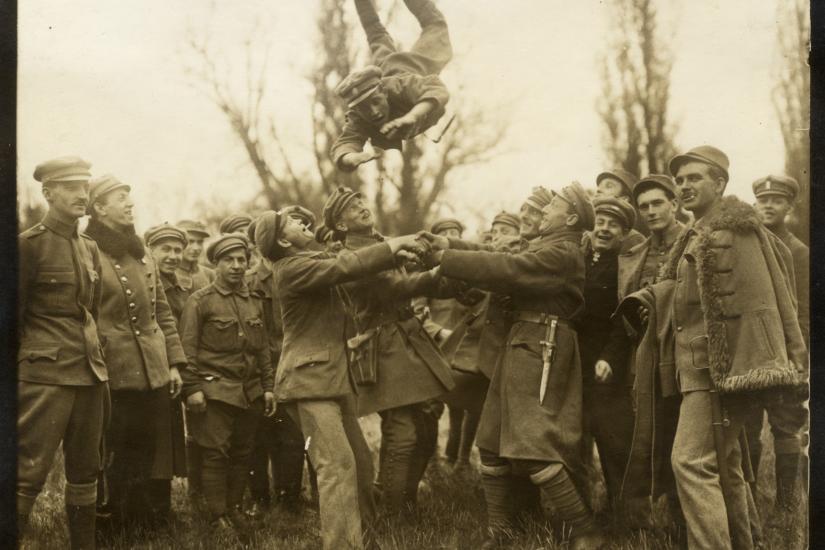 opening remarks by
András Mink
curator of the exhibition

World-famous director of the film Casablanca Mihály Kertész shot his last film in Hungary during the Hungarian Soviet Republic. The premier took place on April 4, 1919. Screenplay writer Isván Siklósi adopted Antal Farkas’s poem My Brother is Coming, which was published a little bit earlier in the daily Népszava. The film, based on the poem, is a protest against the destruction caused by the war, while it extolls the glorious worldwide revolution. The drama of the scenes is reinforced by the images, occasionally colored at a later time. The characters in the film were played by Oszkár Beregi, József Kürti, and Kertész’s wife Ilonka Kovács, who gained international fame under the name Lucy Doraine. When the Soviet Republic failed, My Brother is Coming was banned and the copies were impounded, which is why the film—almost uniquely of Kertész’s films of the time—survived.

Ernst von Dohnányi, together with Béla Bartók and Zoltán Kodály, was member of the Music Committee set up by the Revolutionary Council Government in 1919. His short piece Pastorale, which he premiered in Budapest on December 27, 1920, is based on the melody of the traditional Hungarian Christmas carol Mennyből az angyal (Angel from Heaven), and expresses the tensions, the drama, and the bitter disappointment of the previous years and the hope in rebirth.

Blinken OSA to Open a New Exhibition in Galeria Centralis

Hungarian Calvary – Hungarian Resurrection is the title Oszkár Jászi, the Hungarian civic radical politician chose for his book on the history of the Aster Revolution and the Hungarian Soviet Republic. Jászi spent most of his life after 1919 as a political emigré; his book was published in Vienna in 1920. He concluded that for Hungarians, the Bolshevik attempt—which had “run amok,” as he put it—had for years to come discredited all democratic, liberal political ideas, movements, and any hope of a freer and more just society in Hungary.

It appears that his prediction has, in fact, come true. After more than a century, democratic “resurrection” is yet to come. At the same time, the official historical narrative of the Orbán regime, similar to the views propagated by its cherished predecessor, the Horthy regime, has identified the scapegoat responsible for the collapse and dissolution of the Hungarian Kingdom (“Historical Hungary”) in the 1918 Aster Revolution and 1919 Hungarian Soviet Republic. In their view, the two were essentially identical; the original sin was the Aster Revolution, which then paved the way for the Bolshevik takeover. Both aimed to destroy the old Hungarian Kingdom, eliminate the true historical traditions of the Hungarian nation, and displace the nation from its own country.

This exhibition endeavors to show the events that occurred in Hungary in 1918–1919 in their real domestic and international context. In doing so, it hopes to shed light on those still unsettled traumas of the age, which could never become mere history in Hungarian collective remembrance.

When entering the colorful design of the exhibition, visitors get a rare chance to peek into the raw realities of the depicted year, showcased by original posters, historical photos, genuine documents, and film excerpts of the period.

The drama of 1918–1919, the shocking twists and turns—the lost war, the dissolution of the Monarchy and the Hungarian Kingdom, the Aster Revolution, the rise and fall of the Hungarian Soviet Republic, the counterrevolution, and Admiral Horthy’s rise to power—all took place within a year. From harvest to harvest.