Banning Trump on Social Media: Freedom of Expression in the Era of Platform Power 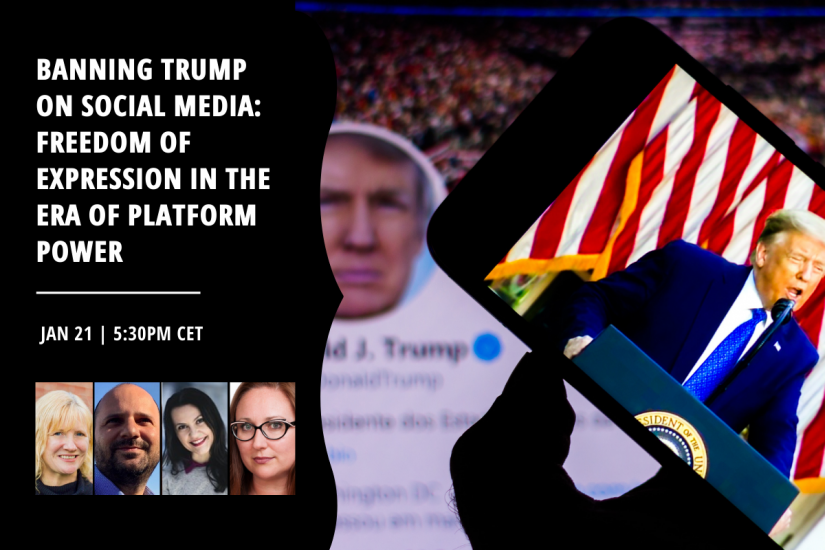 In the aftermath of the attack by the Trump supporters on the Capitol, the President’s social media accounts were suspended by major social media companies including Twitter, Facebook and YouTube. Is it the much-needed cleansing of the public sphere to blot out incitement to hatred and disinformation or, as others, including European governments, fear, the end of freedom of speech at the hands of unaccountable private companies?

We are asking our experts, both from the United States and Europe, to unpack what happened, and what the underlying phenomena and potential consequences are.

The event will be live streamed on the Center's Facebook page.

Kate Coyer is a Fellow at the Center for Media, Data and Society, and an Affiliate of the Berkman Klein Center for Internet and Society at Harvard University. She leads CMDS’ work related to technology and civil society and was previously Executive Director of the Center. Her research examines the use of new and old technologies for social change and the impacts on human rights; as well as social media policy and practice; misinformation and political communication; the complexities of media, technology and politics; and community media and alternative communications. A longtime radio producer and organizer, her work supports digital rights advocacy, community media, and communication access for refugees. Her work and citations have been featured on NPR, BBC, Washington Post, Al Jazeera, New Scientist, Wired, Business Insider, and others.

Eliška Pírková works as Europe Policy Analyst at Access Now, an international civil society organization that defends and extends digital rights of online users at risk. She leads Access Now’s European work on content governance issues, including the EU Digital Services Act package and European Democracy Action Plan, among others. Since 2021, she is the global content governance lead, coordinating Access Now global agenda on freedom of expression online and other related topics. She is a human rights lawyer by education and training, with previous experience working for international organizations and as a legal researcher. She is a member of the Council of Europe’s Committee of Experts on Combating Hate Speech, nominated by the Council of Europe as an independent expert.

Courtney C. Radsch, PhD, is a Fellow at the Center for Media, Data and Society. As a veteran journalist, researcher, and free expression advocate she writes and speaks frequently about the intersection of media, technology, and human rights. She is the author of Cyberactivism and Citizen Journalism in Egypt: Digital Dissidence & Political Change (Palgrave Macmillan 2016) and several other book chapters and articles about the Arab Spring, media, terrorism, and human rights. She has participated in expert consultations at the United Nation, OSCE and E.U. on countering violent extremism, online violence against women, and journalist safety, and has led advocacy missions to more than a dozen countries, U.N. bodies, and the Internet Governance Forum. Her commentaries and articles have been published in The New York Times, the International Herald Tribune, Al Jazeera, Oxford Analytica, and the Huffington Post.