Striking from the Margins II - Monthly Webinar: A post-soviet perspective on the Middle East 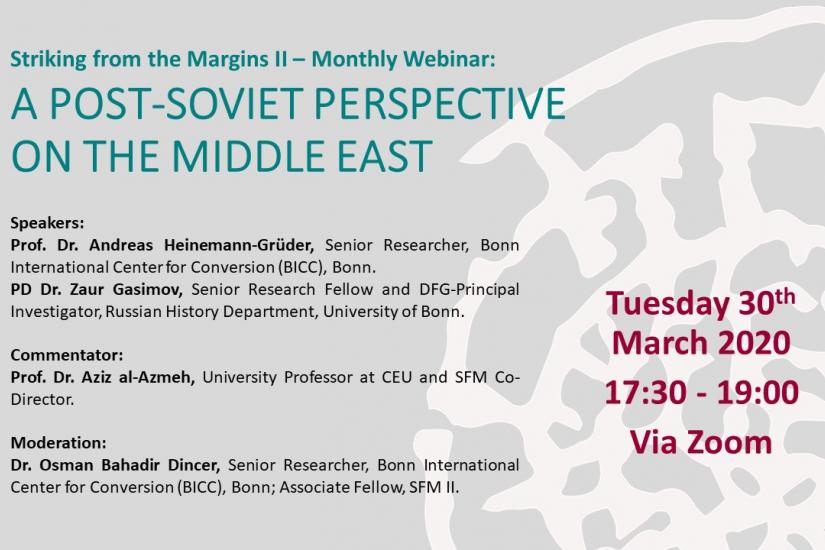 The spark lit in Tunisia in 2010 ignited an uncontrollable blaze that swept through Syria along with Iraq, Libya and Yemen, transporting the Middle East region into a state of violence, conflict, and acute division. Internal conditions have often been probed, but little attention has been paid to broader conditions emerging after 1989

It might be argued that the post-socialist Middle East, which includes Iraq and Syria, has much in common with post-soviet territories in the Balkans, the Caucasus and Central Asia, and that there might be comparable path-dependent developments arising in all. Conflict dynamics and the regional forms of wielding power and authority in the post-Soviet world and the Middle East regions might be noted from even a superficial consideration

This seminar will examine the evolution of post-1989 developments in the region, and consider Cold War era social and political structure in the Middle East in light of Soviet or socialist models and practices. Meaningful comparisons and inferences, and consideration of specific patterns and conditions, would provide initial mileage, to be followed by the critical question: Might one be able to identify and describe a post-Soviet condition, in the same way that one can identify and describe a post-Ottoman world, with partly overlapping geographies? The speakers will address these questions from their expertise in international relations, politics and history.

This webinar will be held on the record.