Careers in Journalism and Media (All Students) 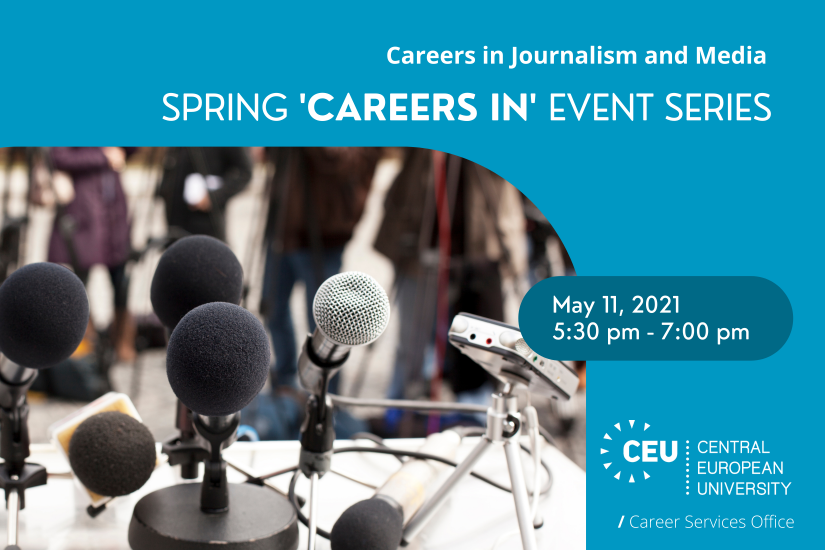 Are you curious about working in journalism and media, and wondering how to break into the field? Journalists and media professionals work in an endless variety of roles, organizations, and industries. The paths they pursue reflect the diversity of their academic backgrounds, personal values, and career interests. Join our online panel discussion to learn more from CEU alumni who built a career in the field- from social media internships and freelance journalism to being in charge of a newspaper or global network of media professionals.

Gabriela Manuli (SPP '12) is the Deputy Director of the Global Investigative Journalism Network (GIJN), an association of more than 200 nonprofit organizations in 82 countries.  A native of Argentina, she has been a journalist for more than 15 years and has extensive international experience in Latin America, Europe, and the United States. She currently lives in Budapest, Hungary, and manages a remote and multicultural team based in more than 12 countries in five continents. She earned an MA in Public Policy (media stream) with distinction at CEU, and graduated with first-class honors in Social Communication Science at the University of Buenos Aires. She coordinates the GIJN Women group, and sits on the board of directors of Chicas Poderosas, an organization which aims to promote female leadership and gender equality in media.

Mariya Parodi (LEGS '13) is currently working as a Senior Press Officer at Amnesty International USA. She has over a decade of experience working in human rights communication for UNICEF, the International Rescue Committee, PEN America, StoryCorps, and the OECD. Mariya has experience managing media relations on a global scale and developed and implemented communications and (social) media strategies for NGOs, IGOs, UN agencies, and local government. Mariya holds a BA degree in English Literature, as well as Political Science, from the City of New York (CUNY) Hunter College, an MA in Human Rights from CEU, and an MA degree in Human Rights and Humanitarian Action from Sciences Po.

Jakub Parusinski (POLS '09) is currently Managing Partner at Jnomics Media, an international media consultancy based in London and Kyiv, and a lecturer on media strategy at the Stockholm School of Economics in Riga. A former journalist, Jakub has written for New Eastern Europe, the Financial Times and the Economist. In 2013-2014 he served as CEO of the Kyiv Post, Ukraine’s leading English-language publication, during which time it became the first Ukrainian recipient of the University of Missouri Honor Medal for Distinguished Service in Journalism. Jakub graduated with a Political Science degree from CEU in 2009, studied Economics at the University of Gdansk, and holds an MBA from INSEAD. He also worked as a consultant with McKinsey in London from 2015-2018, focusing on digital strategy and transformation.

Maja Petrusevska (IR '94) has dedicated her professional life to public broadcasting. After graduating in Journalism in her home country North Macedonia, she worked for the national television in different roles (producer, reporter and presenter). In 1999, she left her post as Editor of the International Desk to join the BBC in London as a producer in the Macedonian Service. She has held different positions in the BBC World Service in the past 20+ years and was responsible for the training of young journalists in London and around the world. She was involved in the set-up of the BBC Persian TV in 2009 and worked on global partnerships between BBC and philanthropic organisations such as the Bill and Melinda Gates Foundation. Currently, she is the BBC World Service Deputy Managing Editor.