Careers in Research & Academia (All Students) 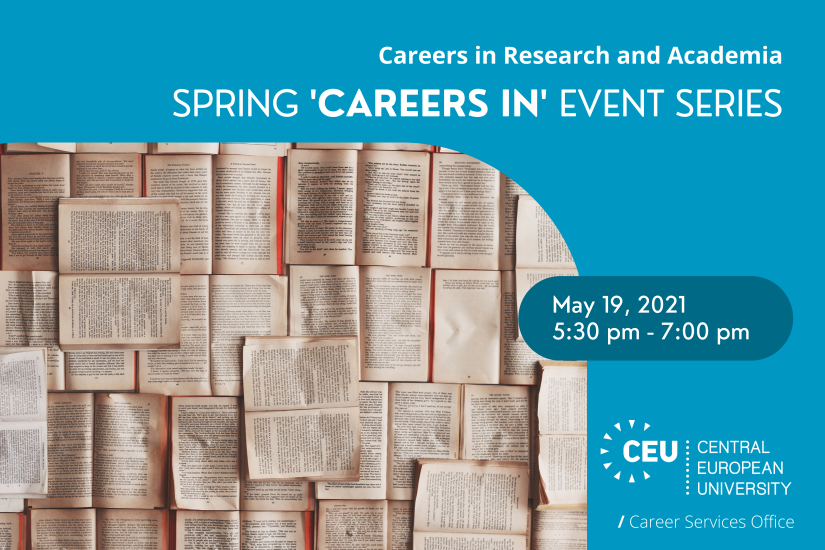 Interested in pursuing a career in academia or research and wondering what options are available? In addition to universities, researchers work in a wide range of different sectors and industries, including think tanks and research institutes, NGOs, international organizations, governments, and cultural institutions such as museums. Join our online panel discussion to hear from CEU master's and doctoral alumni about their careers in research and academia.

Alexandra Medzibrodszky (HIST PhD’20) is a Research Impact Officer at Trilateral Research, a UK and IE-based enterprise focusing on developing new data-driven technologies and contributing to the latest standards in safeguarding privacy, ethics and human rights within the public and private sector. Alexandra supports communication tasks for EU funded projects, her area of expertise is research communication and digital marketing, she is interested in questions of intercultural communication and efficient impact stories. She completed a marketing internship at Cornell University Press in the USA and also worked as a Project Coordinator for the learning management system at Anglia Ruskin University in Cambridge, UK. Alexandra’s academic background is in the Humanities, she holds degrees in Translation and Interpreting and Russian Studies from the Eötvös Loránd University in Budapest, Hungary, followed by her PhD in Comparative History program at CEU.

Brian Fabo (POLSCI’12) After graduating from CEU, Brian went on to work with several think-tanks around Europe, including the  Centre for European Policy Studies in Brussels. Later on, he received his PhD in Economics from the Tilburg University in the Netherlands. Since 2017 Brian has worked as a Senior Research Economist at the National Bank of Slovakia. Over the years he has been involved in a variety of research and policy projects on the European level. In 2020 he has been awarded the Martin Filko Prize for outstanding contribution to economic research and evidence driven policy in Slovakia.

Sorin Cebotari (POLSCI’13) Sorin has diverse work experience both in the private sector and academia. Joining Schneider Electric right after his graduation, Sorin worked as a business consultant there for more than a year.  During his work as Schneider, Sorin applied to and won a Marie Curie Fellowship studying renewable energy projects and their impact on peripheralization. He got his PhD in Geography in 2017 from Babes-Bolyai University in Cluj and after 2 years of paternity leave he works as senior research manager for an Austrian start-up, weTHINK while at the same time Sorin launched a popular science communication project "InfoClima.ro" with the aim to popularize scientific arguments regarding climate change in Romania and promote science based coverage of the subject.