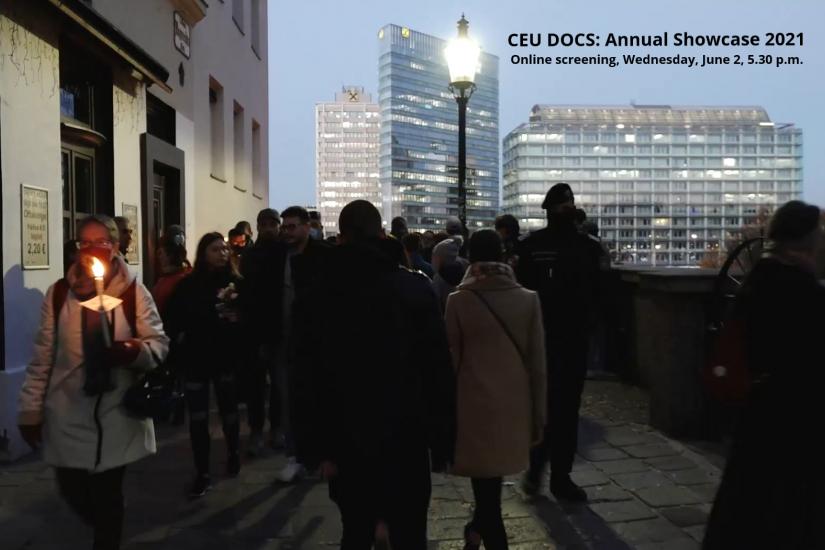 Please join us for this special screening of a selection of short documentaries from CEU filmmaking courses this academic year. The lockdowns this year posed a special challenge for filmmakers, but in spite of that they were able to again produce an exceptional body of work. We will screen work from the courses Fundamentals of Documentary Filmmaking, Documentary for Social Change, Visual Anthropology and Ethnographic Filmmaking, and Foundations of Visual Practice. These courses are part of the curriculum of the Advanced Certificate in Visual Theory and Practice program and are facilitated by the resources and support of the CEU Library’s Media Hub. The students are from a number of different departments, and engage with the subject matter of their research interests through this visual medium.

The screening will take place online, and hopefully will be our last using that format. It will be followed by a Q&A with the filmmakers.

“Home in Archives“
Maryam Shah
Course: Foundations of Visual Practice, Winter Term 2021
Runtime: 5:14
Having spent my whole life in the mountains and coming to the city for studies was a difficult decision. although Islamabad reminded me of my hometown, Gilgit, sometimes because of its hills, but it was not the same. In this project, I look back at the 6 years I have spent in this city till now, and capture those moments that played a role in grounding me to this city, moments that made me feel that I belong here.

“Nicht in Unserem Namen”
Eslam Mohamed, Sophia Fehrenbach, and Tiphaine Trudelle
Course: Fundamentals of Documentary Filmmaking, Fall Term 2020
Runtime: 7:28
A documentary about the aftermath of the 2020 Vienna attack on the Muslim community in Vienna. We followed three members of the Muslim community and asked them to share their feelings about the attack and the rise of terror in Western Europe; about the daily discriminations and obstacles they encounter on a regular basis; and about the way their life has changed since the attack.

“How to Reconnect with Reality”
Tristan Bath
Course: Documentary for Social Change, Winter Term 2021
Runtime: 5:11
Produced without a camera during lockdown, this short documentary uses footage found online, expert interviews, and narration to explore how we can approach the problem of online misinformation in light of the COVID crisis.

“Stray dogs”
Aydan Gurbanova
Course: Documentary for Social Change, Winter Term 2021
Runtime: 5:30
The advocacy documentary "Stray dogs" addresses the problem of stray dogs in Azerbaijan, where in most cases neither governmental bodies nor society treats them well. Thus, activists call for action to protest cruel measures used towards animals. They call for sterilization and vaccination measures but also mention the importance of educating and spreading awareness among people.

“A House For Their Future”
Tamar Giorgobiani
Course: Documentary for Social Change, Winter Term 2021
Runtime: 5:30
People with disabilities in Georgia do not have many opportunities to feel like proper members of society, especially if it comes to the regions outside of the capital city, Tbilisi, and especially if these people are adults. The video was made as a part of the fundraising campaign #AHouseForTheirFuture of the Parents' Organization for the People with Disabilities in the Sighnaghi region (Eastern Georgia) to buy a house that will serve both as a day-center and as a social enterprise for adults with disabilities.

“Housing is a right”
Johana Cernochova
Course: Documentary for Social Change, Winter Term 2021
Runtime 6:21
‘Housing is a right’ tells the story of Emil, an activist with experience of being homeless, who strives for decent housing for all. Emil takes us back to the time when he became homeless and explains what were the reasons behind it. He also recalls his time in the homeless theatre and how he was with other homeless people doing Shakespeare. And last but not least, Emil introduces us to his long-lasting struggle for systematic changes in the Czech Republic to secure decent housing for all.

“#Free Ahmed Samir!”
Tiphaine Trudelle
Course: Visual Anthropology and Ethnographic Filmmaking, Winter Term 2021
Runtime: 7:15
This short documentary follows CEU students taking part in the student-led #FreeAhmedSamir movement. which organized various actions to call for the immediate release of fellow student Ahmed Samir. The film examines the development of the movement and its organization. It follows members in their daily forms of protest, asking them to reflect about the meaning of their actions and their actual value.

“Pandemic Dreams”
Zsófia Bacsadi
Course: Visual Anthropology and Ethnographic Filmmaking, Winter Term 2021
Runtime: 7:56
During the COVID-19 pandemic many people reported having trouble sleeping and struggling with weird, anxious dreams. In order to capture a small segment from the atmosphere of our COVID year, this project collected four dream accounts which are all related to the pandemic in one way or another. Feeling threatened, missing friends and social events and finding new ways to be together and fight together are all part of this unusual and disturbing experience. The project is an attempt to find a thread which connects the subconscious of four individuals whose dreams were shaped in unique ways by the pandemic.

''The Home is a Private Museum''
Derek Basler
Course: Visual Anthropology and Ethnographic Filmmaking, Winter Term 2021
Runtime: 16:00
This piece explores the concept of home; the objects and images by which we recognize it, the sensory experiences so integral to it that often go overlooked, the memories which inhabit it. I center this examination of home around that of my grandparents, as it is a space that, despite the itinerancy of my life, has been one of constancy. In the darkest moment of my childhood, this became another home. And, once the pandemic uprooted my life, it was where I returned when I needed somewhere to go. This time returning corresponded to the period just before the house was sold. With this in mind, the film also partially serves as a eulogy to this space, cognizant that it will pass on to another, with their images and memories soon occupying the space.