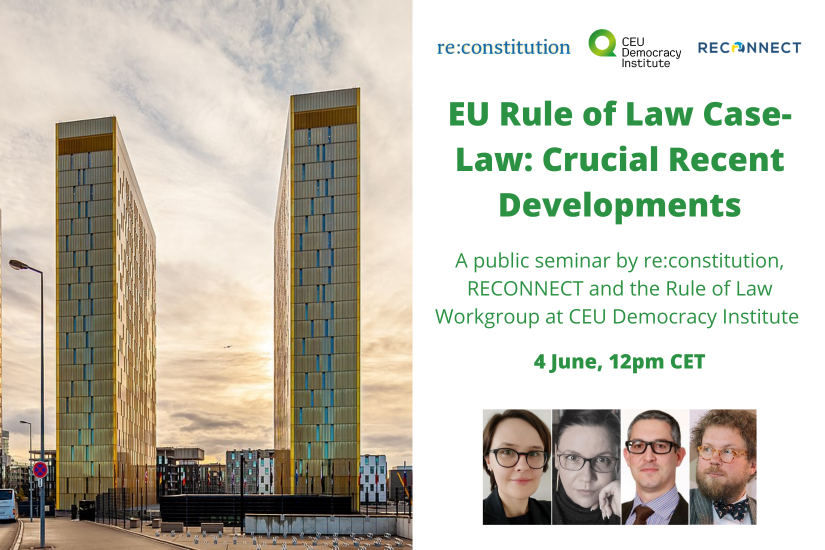 The European Court of Justice is behind a recent and genuine enhancement of European constitutionalism, placing the rule of law, a long-established value and principle of EU law, at the center stage. This rule of law-enhancing process of re-articulation of EU constitutionalism is ongoing and represents the Court of Justice’s incrementalist response to the process of rule of law backsliding which first emerged in Hungary before spreading to Poland. This event aims to present and critically analyze this judicial response on a case-by-case basis taking the Court’s judgment in Case C-64/16, ASJP (Portuguese Judges) as a departure point and its judgment in Case C-896/19, Repubblika (Maltese Judges) as a provisional end point.

Co-organized with re:constitution and RECONNECT, the first public event of CEU Democracy Institute’s Rule of Law Working Group will allow key DI experts engaged with the case-law to outline the bigger picture, while focusing on crucial details.

You may find a detailed background reading here.

Barbara Grabowska-Moroz is Research Fellow at CEU Democracy Institute. In 2018-2021 she was a postdoc researcher in the RECONNECT project (University of Groningen, the Netherlands). In 2010-2018 she worked as a lawyer and project coordinator in the Helsinki Foundation for Human Rights (Warsaw, Poland), and as a legal expert in FRANET (multidisciplinary research network of the EU Fundamental Rights Agency). She graduated from the Faculty of Law and Administration at Warsaw University (M.A., 2010) and Central European University (LL.M., 2012). In 2017 she defended her PhD thesis on the oversight of the special security services in Poland. She has co-authored, most recently, 'EU Values Are Law, after All' (YEL 2020).

Dimitry Kochenov is lead researcher of the Rule of Law Workgroup at CEU Democracy Institute and teaches at CEU Department of Legal Studies in Vienna. His research focuses on the principles of law in the global context, with a special emphasis on the Rule of Law, citizenship, and the enforcement of EU values. He is PI on 'Rule of Law Practices' in the Horizon2020 RECONNECT consortium. He is the author and (co-)editor of numerous books and collections including, most recently, 'Citizenship' (MIT 2019). He consults governments and international organizations and is on numerous scientific and editorial boards, including The Hague Journal for the Rule of Law and The Oxford Encyclopaedia of EU Law.

Laurent Pech is Senior Research Fellow at CEU Democracy Institute (Rule of Law Workgroup); PI within the framework of RECONNECT, Professor of European Law, and Head of the Law and Politics Department at Middlesex University London; Visiting Professor of Law at Bordeaux University; an expert for eLabEurope, and a member of the editorial board of the Hague Journal on the Rule of Law as well as a member of the scientific board of the Montesquieu Law Review. Previously, he also worked in Canada and in the United States, and served as a legal consultant in many post-conflict or EU candidate countries either on behalf of the Council of Europe or in the context of EU-funded assistance and training programs.

Petra Bárd (moderator) is Researcher at CEU’s Legal Studies Department; Research Affiliate at the CEU Democracy Institute; and Associate Professor at Eotvos Lorand University (ELTE), Faculty of Law, Department of Criminology. She also lectures at other universities across Europe including Belgrade, Frankfurt and Vienna. In her research and her more than 230 pieces of publications, she targets issues at the intersection of the rule of law, fundamental rights and their European enforcement mechanism, EU criminal cooperation, and hate crimes. She participates in several EU-funded projects on the above topics. Currently she is PI on 'Recommendations' in the Horizon2020 RECONNECT consortium, and actively contributes to the research limb on the rule of law.