Public Defence of Zlata Bozac on There’s Me, There’s You, and There’s Us: Separateness of Persons, Contractualism, and Their Role in Establishing a Distributive Principle 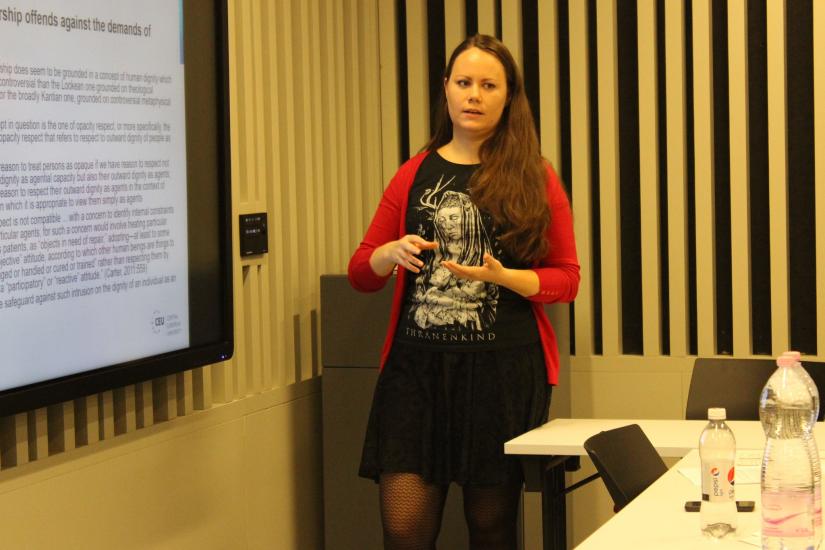 In this dissertation, I embark on the exploration of the fundamental moral commitment that is shared by all deontological theories – the respect for separateness of persons. There is a shared belief that utilitarianism is incompatible with this requirement, but it is rarely demonstrated in what way exactly. I explore the question what it means for a theory to uphold separateness of persons, and conclude that all teleological theories fail to do so. This is, however, due to them starting from a fundamentally different idea of what represents an appropriate subject of moral concern – for them, it is not moral persons, but person-stages. Thus, our commitment to separateness of persons fundamentally depends on whether we accept that unified moral persons are the appropriate, essential starting point of a moral theory. Insofar they are, as deontological theories assume, we have good reason to reject teleology. This leads us to the next question, which is whether separateness of persons as a standard can be used to argue for a specific deontological theory. It is argued that separateness of persons represents a standard which cuts all the way down to the principles and policies, and it is not simply a milestone that needs to be reached only to be forgotten afterwards. Therefore, we need to see how the major rivals in the area of distributive justice, libertarianism and egalitarianism, perform in terms of respect for separateness of persons. The dissertation engages with the two most prominent libertarian and liberal egalitarian thinkers, Nozick and Rawls, who both take separateness of persons as the starting point of their theories, ultimately ending up with very different conclusions as to what this commitment actually entails. Their conclusions are different in the ways they explore the issue and conceptualize the permissible trade-offs between individual gains and losses. This results in the fundamentally different distributive implications of their theories. The libertarian non-moral conceptualization iii of individual sacrifice is explored and rejected as inconsistent with deontology; on the other hand, libertarian attempts at moralization are deemed implausible. I further explore whether some form of (liberal) egalitarianism succeeds in offering a plausible account of individual burdens, specifically via a contractualist framework, which instructs us to minimize the maximal complaint, and offers a standard of justification: a principle is justified, i.e. cannot be reasonably rejected, if under any other proposed principle, someone else would fare even worse than the person with the greatest complaint. Since contractualism represents a general method and is not initially committed to any particular distributive principle, the compatibility of the most prominent liberal egalitarian contractualist theory, that one of Rawls, is critically evaluated. I conclude that Rawls’s application of contractualism is not successful in demonstrating why principles established via contractualism should be of a distinctly egalitarian character. After Rawls’s theory is expunged from its problematic features, the remaining luck egalitarian idea is examined within the contractualist framework, with the conclusion that it generally does not represent a good fit with individual reasoning within a contractual setting, and that we have good reasons to believe that a strong, distinctly egalitarian principle will not be supported within it. However, there are still reasons for adopting more egalitarian principles within contractualism, based on the experiential consequences of inequality. These kinds of arguments represent weaker forms of egalitarian arguments, because, instead of arguing for equality as a starting point, deviations from which need to be justified, they argue for a move towards equality. Thus, while contractualism rejects libertarianism, it does not make as strong of a case for an egalitarian distributive principle as egalitarians might have hoped for