The Past and Present of Christian Democracy 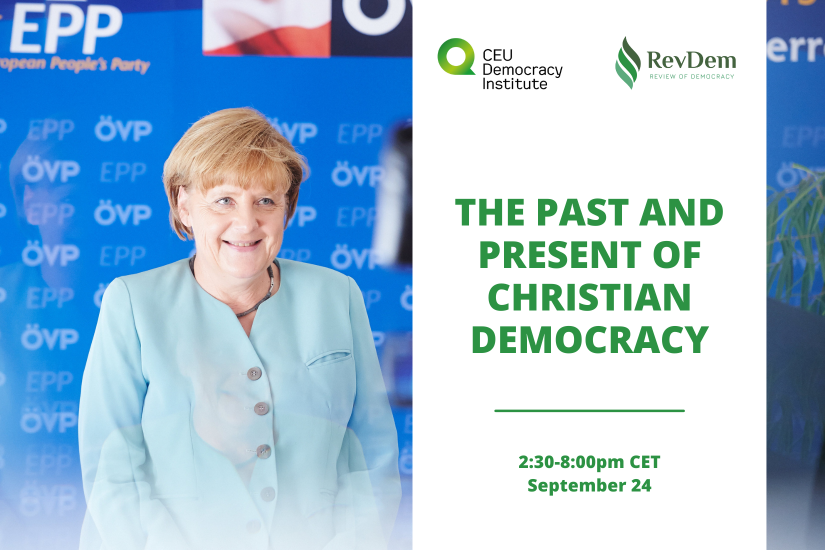 The upcoming German parliamentary elections of September 2021 will mark the end of the remarkable political career of Angela Merkel, Germany’s Chancellor since 2005 and perhaps the most influential politician in early twenty-first century Europe. On this occasion, CEU Democracy Institute’s Review of Democracy invites leading scholars to a special symposium dedicated to the past and present of Christian Democracy. Carlo Invernizzi Accetti’s recent book What is Christian Democracy? Politics, Religion and Ideology (Cambridge University Press, 2019) will serve as a point of departure for our discussions.

The symposium will consist of three parts: the first panel will discuss the history of Christian Democracy à propos Carlo Invernizzi Accetti’s insights. A second, more political panel will take Carlo Invernizzi Accetti’s ideas about Christian Democracy as a starting point for discussing the transformation of Christian Democracy in the early twenty-first century and zoom in on the impact and legacy of Angela Merkel. The last part of the symposium will be devoted to the political career and leadership of Angela Merkel. Her biographer Kati Marton, the author of The Chancellor: The Remarkable Odyssey of Angela Merkel (Simon & Schuster, forthcoming 2021), will reflect on her findings regarding the first female Chancellor of Germany.

The discussion will be streamed live on the Review of Democracy’s Facebook page. If you are interested in following it, then please join the Facebook event as well.

Christian Democracy in History: In Dialogue with Carlo Invernizzi Accetti

The Transformation of Christian Democracy in the Early 21st Century

Stefan Auer is Jean Monnet Chair and Associate Professor at the University of Hong Kong. He is the author of Liberal Nationalism in Central Europe (Routledge, 2004). His research interests include political philosophy, spanning thinkers as diverse as Carl Schmitt, Hannah Arendt, Václav Havel and Slavoj Žižek; the comparative study of nationalism and the various aspects of the crisis of the European project. He is currently working on a book entitled Post-Brexit European Union: A Sovereign Europe, or a Europe of Nation States? (Hurst, forthcoming).

Giuliana Chamedes is Associate Professor of History at the University of Wisconsin-Madison. She is a scholar of international and global history, with a focus on the place of Europe in the wider world. She is the author of A Twentieth-Century Crusade: The Vatican’s Battle to Remake Christian Europe (Harvard University Press, 2019).

James Chappel is the Gilhuly Family Associate Professor of History at Duke University. His first book is entitled Catholic Modern: The Challenge of Totalitarianism and the Remaking of the Church (Harvard University Press, 2018). Among other things, it traces the birth of Christian Democracy in Catholic circles in the 1930s and 1940s.

Martin Conway is Professor of Contemporary European History at the University of Oxford, and Fellow of Balliol College Oxford. He is the author of a number of works on Catholic politics, including Catholic Politics in Europe 1918–1945 (Routledge, 1997), and “The Age of Christian Democracy: The Frontiers of Success and Failure” in T. Kselman and J. Buttigieg (eds.) European Christian Democracy in Europe and Latin America (Notre Dame University Press, 2003). His most recent book is Western Europe’s Democratic Age 1945-68 (Princeton University Press, 2020).

François Foret is Professor of political science at the Cevipol-Institute for European Studies, Université Libre de Bruxelles. He is also fellow at the European Governance and Politics Programme, Robert Schuman Centre, European University Institute Florence. His specialization is in political sociology; European studies and comparative politics. His researches focus on the legitimization of political orders; symbolic politics; the interaction between politics, culture, religion and values; the comparison between Europe, Japan and the US. He is the author of Religion and Politics in the European Union, The Secular Canopy (Cambridge University Press, 2015).

Carlo Invernizzi Accetti is Associate Professor of Political Science at the City University of New York (City College) and Associate Researcher at the Center for European Studies of the Institut d’Études Politiques de Paris (Sciences Po). He is the author of Relativism and Religion: Why Democratic Societies Do Not Need Moral Absolutes (Columbia University Press, 2015) and What is Christian Democracy? Politics, Religion and Ideology (Cambridge University Press, 2019) as well as the co-author of Technopopulism: The New Logic of Democratic Politics (Oxford University Press, 2021). His research is at the point of intersection of democratic theory and comparative party politics.

Katarzyna Krzyżanowska is PhD researcher at the European University Institute in Florence. She is the editor of the Review of Democracy, and curates its Review of Books section, as well as co-curates blog on fiction. In her academic work she analyses the concept of the rule of law in context of the Polish constitutionalism, and is interested in democratic innovations.

Vilius Kubekas is Doctoral candidate at Central European University and Assistant Editor at the History of Ideas section of the Review of Democracy. He is interested in Modern European intellectual and cultural history, history of ideologies and the relationship between politics and religion.

Ferenc Laczo is an assistant professor with tenure in European history at Maastricht University. He received his PhD from the Central European University and was formerly employed at the Imre Kertész Kolleg Jena. He is the author or editor of seven books, including the monograph Hungarian Jews in the Age of Genocide. An Intellectual History, 1929-1948 (Brill, 2016) and The Legacy of Division. East and West after 1989 (CEU Press–Eurozine, 2020), a volume he has co-edited with Luka Lisjak Gabrijelcic. He is an editor at the Review of Democracy and co-curator of its History of Ideas section.

Paweł Marczewski is the head of the Citizens research unit at ideaForum, the think tank of the Batory Foundation in Warsaw. He is also a member of Carnegie’s Civic Research Network.

Kati Marton is an award-winning journalist and author based in New York City. Marton is currently a director and formerly chair of the Committee to Protect Journalists. She also serves on the board of directors of the International Rescue Committee and the New America Foundation, a public policy think tank. She is a member of the Council on Foreign Relations, P.E.N. International and the Author’s Guild, and sits on the board of Central European University. Since 1980, Marton has published nine books and contributed as a reporter to ABC News, Public Broadcasting Services, National Public Radio, The New Yorker, Atlantic Monthly, The Times of London, The Washington Post, The Wall Street Journal, Newsweek, Vanity Fair and The New Republic. Her latest book is The Chancellor: The Remarkable Odyssey of Angela Merkel (Simon & Schuster, forthcoming 2021).

Michał Matlak is managing editor of the Review of Democracy, holds a PhD from the European University Institute. He was a visiting scholar at Princeton University, the Hertie School of Governance in Berlin, KU Leuven and the Institute for Human Sciences in Vienna. His research focuses on the forms of secularism in the European integration process and various aspects of Europeanization. He works in the European Parliament as a policy advisor.