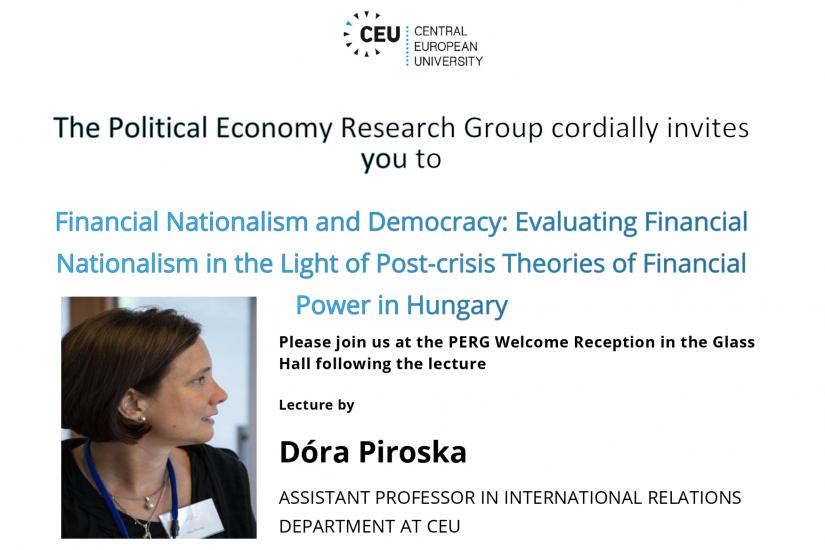 Join us at PERG's first lecture this academic year, followed by a welcome reception in the Glass Hall.

ABSTRACT / Since the global financial crisis, for IPE scholars a core intellectual puzzle is to explain the rise of financial nationalist governments into power and their sustained capacity to pursue financial nationalism in an era when the interconnectedness of global financial markets surpasses any historical level. Financial nationalism is puzzling because of its capacity to redistribute gains from international financial transactions among a larger share of domestic society. This paper, using the example of Hungary, identifies financial nationalism’s unexpected achievements through contrasting it with claims of three theories of financial power: structural power of finance, financialization of state institutions, and financialization of everyday life. Specifically, it documents the Hungarian government’s achievement to increase domestic ownership of banks, to importantly enlarge the scope of central banking, and to significantly reduce the credit exposure of a large segment of the Hungarian population. It also describes an underemphasized critical condition of financial nationalism’s advancement, at each examined policy domain, namely the diminishing democratic oversight of major financial transformations.

BIO / Dora Piroska is assistant professor at the IR department of CEU and also works for Corvinus University of Budapest. She holds a PhD from CEU in Political Science/IR track. Her research focuses on the international political economy (IPE) of banking and finance, banking regulation and development finance. She has a particular interest in the Eastern European region. Recently she has published a critique of the regulatory sandbox approach to fintech regulation, on the development banking fields in Hungary and Poland, the banking union’s perception in non-eurozone member states, and the EU’s financial crisis management’s impact on democracy in Slovenia. She published in JCMS: Journal of Common Market Studies, New Political Economy, Competition and Change, Journal of Economic Policy Reform, Policy and Society, Third World Thematics: A TWQ Journal, Europe-Asia Studies, in thematic volumes with Routledge and Oxford University Press, an edited volume with CEU Press, and in several Hungarian outlets.