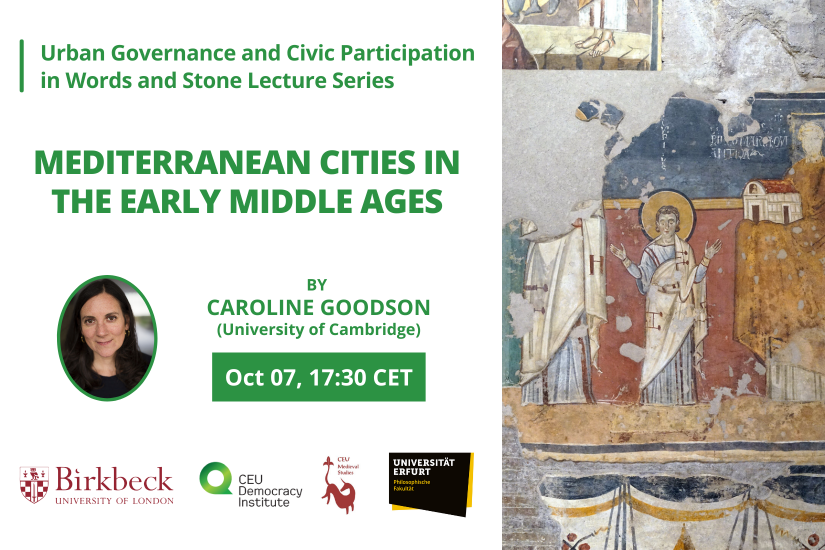 The Western Roman empire splintered and dissolved in the fifth and sixth centuries, leaving echoes of a coherent political system anchored in the cities. The imperial administrative structures which united the territories of the empire had been prominently urban and governance had taken a predominantly urban, civic shape in antiquity. Cities played a variety of roles in post-Roman kingdoms, sometimes affording a platform for construction of new political authorities, sometimes providing alternative economic networks away from royal or aristocratic centres. In Mediterranean lands, they were bigger, more diverse, and more closely bound to political authority. This evening’s lecture will explore life in cities of the early medieval Mediterranean (c. 500-c.1100), North, South, East and West, looking at civic participation — if such a thing can be identified in the early Middle Ages — and consider the political uses of urbanism.

Caroline Goodson is an historian and archaeologist early medieval Mediterranean. She is interested in the intersections between power, politics and the material world, and her research explores the ways in which people cultivated authority and wielded it through architecture, topography, and the stuff they used in everyday life. She is the author of The Rome of Pope Paschal I (817-24) (2010) and most recently, Cultivating the City in Early Medieval Italy (2021), and the co-editor of numerous important collaborative volumes including Cities, Texts, and Social Networks 400-1500 (2010), Villa Magna: an Imperial Estate and its Legacies: Excavations 2006-10 (2017), and Graphic Signs of Identity, Faith and Power (2017).