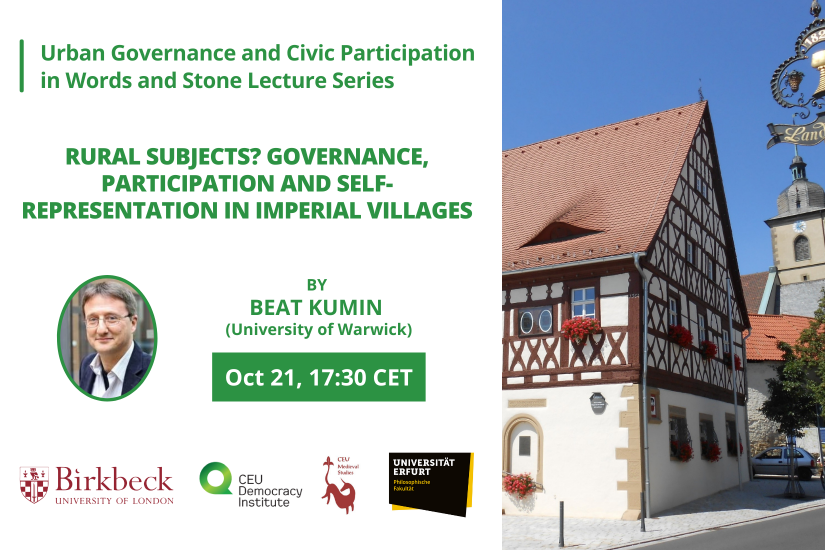 For pre-modern society, civic participation and representation tend to be associated with towns and cities. There were, however, pockets of self-government and republican spirit in the countryside. This lecture highlights the existence of peasant communities without intermediate princely or urban lords in the Holy Roman Empire. Substantial numbers of Reichsdörfer (imperial villages) ran complex regimes which relied on popular involvement and proclaimed their autonomy in seals, crests, chronicles and public buildings. Looking at case studies located in present-day Bavaria, Hesse and Schwyz, Beat Kumin will investigate constitutional varieties (ranging from oligarchic council-based systems to sovereign communal assemblies), extensive bottom-up influence over secular and ecclesiastical affairs, ambivalent relationships with the outside world (especially their so-called imperial 'protectors') and the universal emphasis on collective freedom in internal as well as external perceptions. Placed alongside the rural republics of the Swiss Confederation and the (until 1559) effectively independent parish federation of Dithmarschen on the North Sea coast, imperial villages challenge common assumptions about powerless 'rural subjects', underline the significance of communal bonds and remind us that the participatory models of modern democracies have multiple roots stretching far back into the European past.

Beat Kumin is Professor of Early Modern History at the University of Warwick, U.K. He works on political and religious life in local communities, with a particular focus on parish churches and public houses in the German lands. Publications include Imperial Villages: Cultures of Political Freedom in the German Lands c1300-1800 (Leiden: Brill, 2019) and the edited volume Political Space in Pre-industrial Europe (London: Ashgate, 2009).

Cover image: The center of the former Reichsdorf of Gochsheim near Schweinfurt in Bavaria, featuring village hall, parish church, inn and a walled ring around the old cemetery, giving it a quasi-urban appearance. Photo: Beat Kumin